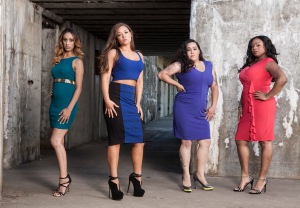 At first I was hesitant to even screen this show but I’ll admit I’m intrigued about prison wives. Mainly the women who marry men already incarcerated and women staying with men who commit horrific crimes and have long jail terms. I breezed through the first two episodes and it’s everything you’d expect this show to be.

Prison Wives Club focuses on four women and their complicated, bizarre marriages to men in prison. They all live in Washington state. Kate, 28, and Jhemini, 25, are sort-of friends and live in Seattle. Jhemini gets on Kate’s nerves because Jhemini “thinks she’s perfect.” In episode two, Jhemini says: “I don’t want to look like someone who’s married to someone in prison.” Not quite sure of what that woman looks like but Jhemini sure stereotypes people.

LaQuisha, 32, and Ana, 28, who live in Tacoma, Wash. are friends because their husbands are best friends in prison. LaQuisha decides to form a support group for prison wives and Kate and Jhemini attend. The women spend a lot of time justifying why they’re married to men in prison, communicating with their husbands via phone or Skype and visiting once a month or so. In between they’re hanging out with friends and working. Or not.
This show is definitely a train wreck. It’s mind-boggling. LaQuisha’s the only one who is independent and mature. She’s the most interesting of the three woman. I just can’t wrap my head around her marriage to Phillip.

Jhemini
Her husband is currently serving a 10-year sentence for assault.

“We slept together and it was amazing and an emotional attachment formed. I married him knowing he was going to be going away.”

Why? Really why? Jhemini gets extended family visits (EFV) with her husband. So I guess she’s getting that amazing sex every so often. She’s also very judgmental of the other women in the group. Unsure how she supports herself.

Her husband Carlo is also serving a 10-year sentence for assault. He’s completed three years. They met in high school and ran into each other a few years later. She visits Carlo once a month and is allowed conjugal visits.

“Just because my husband’s away doesn’t mean I have to act like some raggedy prison wife.”

Is there such a thing?

“What do I do for sex? I travel with a pack of lesbians and Carlo is fine with me having girl on girl fun.”

LaQuisha dated Phillip in high school and 11 years later she got a facebook message from him. Prisoners are allowed to Facebook? He’s in prison for murder. A 60 year sentence of which he’s served 13 years. Oh what is the point to be married to a lifer. She has a daughter and her ex-husband still loves her and wants to be with her. She works at a hospital, I think as a rad tech.

“I’m okay with it because this is the man I love.”

Ana met Michael via writeaprisoner.com and they’ve been married about a year. Sweet newlyweds. haha. He’s been in prison since 1987 but might get re-sentenced under some sort of law because he was 15 years old when the crime occurred. Ana works late nights at a convenience store. Her husband robbed a convenience store. She lives with two friends to save money.

enjoy my posts about Lifetime TV programs? please consider donating so I can keep doing what I’m doing. Every dollar helps. button at right on my site.

This entry was posted on October 28, 2014, 06:33 and is filed under TV. You can follow any responses to this entry through RSS 2.0. Both comments and pings are currently closed.