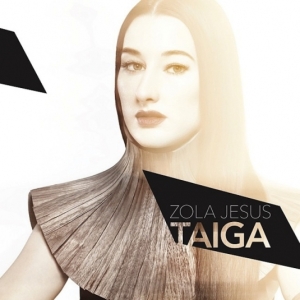 This album makes me want to howl at the moon and perform a series of sun sign salutations. Packed with diverse arrangements and emotionally dense lyrics. 25-year-old Nika Danilova [using Zola Jesus as her musical nom-de-plume] seems an old soul. Sage and forthcoming. She wrote the album on the difficult-to-reach Vashon Island in the Puget Sound. “I used to be very scared of failure, of the responsibility of doing the one thing I knew I was born to do,” Danilova said. “This record was made in an effort to try to make the most massive record I could, shunning all fear and any sense of smallness I ever once had.” Goal achieved.

The title track haunts and swirls in darkness. Then there’s the bold “Dangerous Days” with its invigorating beats and stirring vocals. The slower, expansive “Dust” makes you feel you’re on top of a cliff pondering existentialism. Zola Jesus ebbs and flows with gorgeous range. Opening with horns, “Hunger” truly galvanizes with its charging beats and chorus: “I got the hunger/I got a hunger in my veins/it’s taking me under/’til it takes me away.” Another slower track “Long Way Down” brings to mind water elements. There’s definitely a connection to natural elements in all the songs. Zola Jesus named the album Taiga because that’s the Russian name for the boreal forest and she likes the possibilities that its wild, uncharted territory entails. Zola Jesus reminds me of another darker unusual artist, Chelsea Wolfe. Taiga stuns with its underlying complexity. One of the year’s best.

This entry was posted on October 7, 2014, 03:06 and is filed under Music. You can follow any responses to this entry through RSS 2.0. Both comments and pings are currently closed.