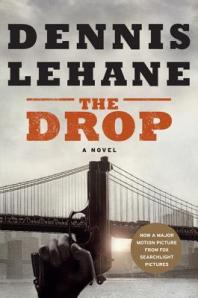 Fox Searchlight asked Dennis Lehane to adapt his short story “Animal Rescue” into a screenplay for the feature film The Drop starring Tom Hardy, Noomi Rapace and James Gandolfini. Lehane was a staff writer for the magnificent The Wire and currently is a writer/producer on HBO’s Boardwalk Empire. However, this didn’t appease Lehane as he decided to then write a novel based on the screenplay. A ploy for more money that he doesn’t need or he felt he had more he wanted to elaborate on in book form. As I read The Drop, I envisioned Hardy, Rapace and Gandolfini. Not sure if that’s good or bad.

Though mystery/thriller definitely isn’t my go-to genre [I prefer literary fiction, contemporary fiction and memoir] I enjoy reading a thriller from time to time. I read Shutter Island by Lehane knowing that the film version would soon be out. I decided why not read this one too before the film which features James Gandolfini in one of his last performances.

As with other novels, Lehane knows the back streets and neighborhoods of Boston. He painstakingly creates these sad, authentic and stuck characters. Lehane depicts Boston and the people who live in the city with love, pride and truth.

“The traffic had thinned considerably as they drove past Harvard Stadium, first football stadium in the country and yet one more building that seemed to mock Marv, one more place he’d have been laughed out of if he’d ever tried to walk in. That’s what this city did–it placed its history in your face at every turn so you could feel insignificant in is shadow.”

A few days after Christmas, forlorn bartender Bob Saginowski rescues a beat-up and abandoned pit-bull puppy from a trash can. In doing so he also befriends an enigmatic, troubled woman named Nadia and the two become friends through caring for the puppy. Bob works at his Cousin Marv’s bar which is a drop for some Chechens. That means it’s a safe spot for them to stash cash. Marv once ran with a gang of small-time hoodlums but since lost his bar to the Chechens. His name might be on the bar but they run the joint.

“Bob knew something was a little off about Nadia–the dog being found so close to her house and her lack of surprise or interest in that fact was not lost on Bob–but was there anyone, anywhere on this planet, who wasn’t a little off? More than a little most times. Nadia came by to help him with the dog, and Bob, who hadn’t known much friendship in his life, took what he could get.”

When the bar gets robbed, Bob and Marv set out to hunt for the missing money and become entangled with a curious police offer who attends the same church as Bob, some hapless low-level criminals, the dog’s original and creepy owner and the angry Chechens. There’s a fine line connecting every character to criminal activity. It’s dark.

You might want to read this before you venture out to see the film which opens in theaters September 12 if you’re the kind of person who likes to read the book before the film although in this case the film came first which confuses everything.

purchase at Amazon: The Drop

book-to-film, books based on film, Boston, Dennis Lehane, The Drop

This entry was posted on September 8, 2014, 03:02 and is filed under Books, Film. You can follow any responses to this entry through RSS 2.0. Both comments and pings are currently closed.