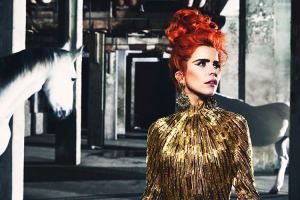 bluesy British singer Paloma Faith will tour the U.S. later this month and through October in advance of the release of her latest album A Perfect Contradiction due out October 7, 2014. Her music melds smoky vocals with soulful melodies.

This entry was posted on September 8, 2014, 23:37 and is filed under Music. You can follow any responses to this entry through RSS 2.0. Both comments and pings are currently closed.