Brittany Murphy’s death at age 32 was tragic and shocking. Unfortunately so too is this biopic on Lifetime. It’s like watching a first-time-script-read-through. Girl-next-door Amanda Fuller [she played Tim Allen’s daughter in the TV series Last Man Standing which I’ve never seen] bears zero resemblance to Brittany Murphy nor does she attempt to personify the charming, doe-eyed actress. I read that Fuller says she wishes she’d had more time to lose weight—I guess in an effort to look more like Brittany—but the movie was shot in a few days and she had no time to prepare for the role. If you’re going to make a biopic about someone, you have to do the research and put in the time to make it entertaining and enlightening. The failed project certainly doesn’t fall completely on Fuller. Someone else cast her and she didn’t have adequate preparation time. 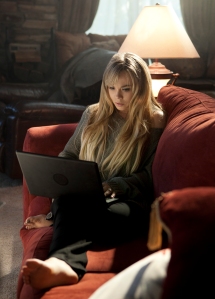 It opens with the press conference following Brittany’s mysterious death in 2009. The official cause of death: pneumonia and anemia. Some suspect poison. Her mom Sharon Murphy [Sherilyn Fenn] and Brittany’s husband Simon Monjack [Eric Peterson] put up a united front. There’s tabloid speculation about drugs. Both deny that. The movie then avoids delving into any of this. The controversy surrounding her death needs to be addressed in a movie about her. It’s like making an Amy Winehouse film and avoiding her drug use. Brittany’s shown taking various pills but nothing illicit. No heroin. No coke. She doesn’t even drink that much. The Brittany Murphy Story focuses on Brittany’s meteoric rise to fame in the 90s, her constant self-doubt and struggles with being a celebrity.

Back in New Jersey a younger Brittany performs in the local theater. She tells her mom she wants to do more. Her mom confides to another mom that she thinks Brittany’s too young for much else until a guy approaches her about putting Brittany in a commercial. Sharon’s got bills to pay and a few commercials could get them out of debt. Soon after, Brittany convinces her mom to move to Los Angeles. She’s extremely close to her mom. Her mom’s her best friend and confidante. At one point her mom wants Brittany to live on her own but Brittany refuses.

After a few smaller parts, she lands her breakthrough role on Clueless with Alicia Silverstone. All along through her castings and during Clueless we see that Brittany struggles with her body [she’s not thin] and being the “quirky girl” in a sea of blonde, blue-eyed often emaciated Hollywood actresses. Too bad she didn’t realize that quirky made her stand-out from other actresses. She frets she’s not being offered decent parts only as the girlfriend or best friend. She dyes her hair blonde and loses a lot of weight. She lands enough roles in bigger films– namely Girl, Interrupted (1999), 8 Mile (2002), Little Black Book (2004) and The Dead Girl (2006)–and can afford to buy a house. There’s little mention of anything but Clueless and Just Married, because she briefly dated Ashton Kutcher after the film wrapped. Her other roles aren’t mentioned and she had some good ones. particularly in 8 Mile. The movie focuses more on her difficulties finding roles than on the roles she excelled at which is a shame. she was talented. Hollywood can be fickle. She meets a paparazzi photog, Simon Monjack, who charms his way into her life. Monjack comes along with questionable credentials and motives but he seems to love Brittany in a way she needs or wants to be loved at this time.

Peterson and Fuller possess zero chemistry making the relationship and subsequent marriage a complicated one to champion. Sherilyn Fenn is okay as Brittany’s mom. Both actors lack emotion when it counts. It’s like watching a student film. When Sharon gets cancer and it returns later, it’s crocodile tears from Fenn. When she’s angry with Brittany or concerned, it’s just not credible. Worst of all, Fuller often seems to be reading her lines, not emoting and getting into character. She doesn’t even attempt Brittany’s raspy voice and New Jersey accent. Throwing on a few wigs doesn’t make you the person. Ask Helena Bonham Carter who completely transforms in even a small role. The only actor who nailed his part was Adam Hagenbuch as Ashton Kutcher. He looks just like him in this movie and does a commendable job with the paltry script. Bit of a caricature but way better than anyone else. At least he makes an effort.

Directed by Joe Menendez [on his CV: one episode of TV’s From Dusk ‘Til Dawn] in a choppy and indifferent style, you can tell at times that he considers Robert Rodriguez a major influence. The script, written by inexperienced writers Peter Hunziker and Cynthia Riddle, lacks depth and feeling. They’ve written nothing of note. You just don’t care all that much. For a biopic the audience needs to care and be able to reminiscence about the person the movie’s about. I have to wonder if a woman directed this movie if there would be more compassion.

I know people will tune in but it’s a colossal mess from script to directing to acting.

enjoy my posts about Lifetime TV programs? please consider donating so I can keep doing what I’m doing. Every dollar helps. Make a Donation button at right on my site.

The Brittany Murphy Story airs on Lifetime on Saturday September 6 at 8 ET/PT.

This entry was posted on September 6, 2014, 16:24 and is filed under Uncategorized. You can follow any responses to this entry through RSS 2.0. Both comments and pings are currently closed.