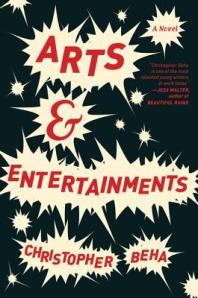 “Unfortunately Eddie wasn’t ugly. He was good-looking in an entirely conventional way, which turned out to be fatal. He couldn’t turn himself grotesque. Casting directors found him blandly inexpressive, and they made no effort to conceal their finding. He overcompensated, and all the subtlety went out of his work.”

Smart, fun, breezy read about celebrity and the price of fame. Handsome Eddie Hartley teaches drama at the exclusive prep school he attended. The 33-year-old’s married and he and wife have been trying to have a child. Expensive fertility treatments seem the last hope for the couple. Years ago Eddie seemed poised to break-out yet mediocre skills and a pretty face could only prologue Eddie’s so-called career a limited time. Eddie thrived on gleams of fame. He adores it when his students mention his guest-starring TV roles.

After his recent 10-year class reunion someone suggests that he could make money on his former relationship with a current celebrity. He once dated a woman in college who is now a major star of a hit television series. She’s on magazine covers, talked about in tabloids and on entertainment shows. It turns out that Eddie and Martha used to tape themselves. Eddie decides to sell a sex tape and shortly after, his wife finds out she’s carrying triplets. Reality shows ensue for Eddie’s wife (now estranged) and soon after for Eddie.

“But Eddie had wanted attention. Now that he had it, he wasn’t sure what to make of it. Did the quality of the attention matter?”

This is a fast read. You become wrapped up in the behind-the-scenes questionable ethics and mechanics involved in filming a reality show. Who hasn’t seen at least one reality program and wondered what’s real and what’s fabricated or enhanced for audiences? As Eddie enjoys the fast-track to fame his reality crumbles. His sense of self suffers and he begins to question everything.

This entry was posted on July 1, 2014, 15:51 and is filed under Books. You can follow any responses to this entry through RSS 2.0. Both comments and pings are currently closed.