High-school senior Hannah [Laura Wiggins] puts a lot of pressure on herself as a teenager to look good and be thin as she’s a dancer surrounded by lots of seemingly perfect bodies. She’s also applying to colleges. Her younger brother, Leo [Brendan Meyer], is a wrestler who always needs to maintain his weight to remain in his wrestling competition class. Leo’s father [Marcus Giamatti] stays on top of Leo’s weigh-ins and monitors Leo’s eating and wrestling career. He’s under intense pressure.

One day when they’re supposed to be working on college essays, Hannah’s best friend shows her a “thinspiration” site [a website for people obsessed with dieting and eating disorders and being dangerously thin] and Hannah becomes obsessed with it. She originally wants to lose only five pounds but then gets further involved with the people on the site and losing more and more weight. Someone named ButterflyAna [Izabella Miko] takes a particular interest in her and pushes her to the extreme, getting inside her head and telling her to be in control by being as thin as possible and not eating. She eats less and less until she completely stops eating. Her original weight is 128. She gets to her goal weight of 123 and she’s thrilled. When her mom buys her a new pair of shorts, Hannah’s completely upset that they don’t fit and they’re a size 6. She flips out. With the support through her online friends she sets a new goal to lose 20 pounds.

Her mother finds out what she’s doing. Hannah tells her: “I believe what I do on my computer is private.”

Her mom says: “not private. The internet is public and it’s permanent.” 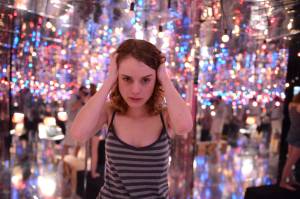 Even when her parents force Hannah into outpatient treatment, she’s sneaking behind their backs and losing weight and connecting with her ana [pro-anorexia, eating disorder] friends. She’s just as unhealthy, fixated and deceptive as she was before. It’s questionable what will break Hannah of her preoccupation with being as thin as possible. Leo tries to support his sister but his wrestling season keeps him so busy. He feels bad that he hasn’t been there for her as much as he used to be. 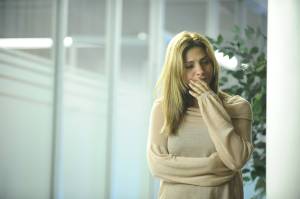 As Hannah’s mom, super-talented Callie Thorne looks wonderful and plays a supportive, caring mom. She realistically expresses the anger and concern for her daughter’s health as well as fear of her daughter at times. Hannah’s brain has become so malnourished through starvation that she’s lashing out at her mother. As Hannah, young actress Laura Wiggins impressively goes there. She’s deep into the darkness behind the disease and completely effective in the delusional states it causes. Clearly teens with eating disorders think they’re invincible and they’re confused by reality. This family learns the hard way that eating disorders silently take over and destroy young lives. Written and directed by Tara Miele Starving in Suburbia is scary, tragic good.

This entry was posted on April 26, 2014, 23:41 and is filed under Film, TV. You can follow any responses to this entry through RSS 2.0. Both comments and pings are currently closed.