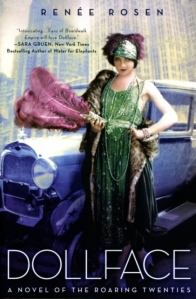 “Shep Green was the type of man a girl like me dreamed about. He may have scared me, but he also thrilled me. He could bring me into a world I’d only read about in magazines and seen in movies. If I were his girl, I’d never have to model jewelry again to get into a fancy party. Instead I’d be at the top of the guest list.”

Young Vera Abramowitz works hard at her day job as a typist but lives paycheck to paycheck and it’s not enough. She finds some second jobs modeling jewelry at fancy parties. It’s the roaring twenties and prohibition has reached Chicago. One night she wanders into a speakeasy and meets a mysterious and handsome well-dressed man who gives her a sampling for the extravagance she desires. She’s a bit naïve about what’s going on and why Tony’s so connected and able to take her to the hot spots in Chicago. Soon enough she captures another man’s attention and falls for him before realizing he’s a mobster and part of a rival gang in competition with Al Capone. When she becomes pregnant, it’s too late. She wants to keep the baby and she’s in too deep. She marries Shep Green and carries on an affair with Tony from the rival gang. Apart from her paramours, Vera possesses an independent spirit and a strong character. The more interesting aspects in the novel are when Vera and her friend Evelyn hang out or when Vera joins a Jewish women’s organization. When she’s fretting over her love triangle it falls into romance novel territory and that’s when Dollface can be melodramatic and drags out at times but it’s intensely researched and descriptive.

FTC Disclosure: I received this book for review from Penguin Group.

This entry was posted on December 6, 2013, 03:35 and is filed under Books. You can follow any responses to this entry through RSS 2.0. Both comments and pings are currently closed.