She gets offered a lot of Jewish roles even though Scarlett Johansson’s also Jewish: “every Jewish role comes to me. I look more Jewish than Scarlett [Johansson].”

“I don’t like confrontation, but I’m probably less afraid of it now. I wouldn’t say I’m confrontational. But I say my opinion. I realize how much my non-confrontation was about trying to have everyone like me.” 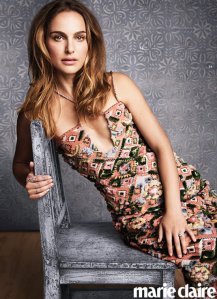 She has great parents.

“They made me feel that they would drop anything at any time to help me. I never felt like there was anything more important than me. Which I know can probably create an assh*le, too. It gives you a deep sense of security and safety to feel that your parents will love you no matter what.”

This entry was posted on November 5, 2013, 13:25 and is filed under Uncategorized. You can follow any responses to this entry through RSS 2.0. Both comments and pings are currently closed.