According to NPR, I’m a SLUT.

Should I be shocked by the following joke NPR’s Wait Wait hosts made about Sex and the City going off the air a decade ago? 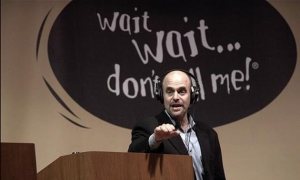 Peter Sagal: “It’s been 10 years since Sex and the City inspired women everywhere to move to New York, sleep around and spend their money on shoes.”

It’s a cheap joke. It’s disgusting. And with women being raked over the coals by our government lately, it’s unbelievable that an NPR program would deign to think this the slightest bit humorous. Need I remind people that Republicans currently are turning back the clock for women and taking away birth control options and abortion rights from women? Watch this awesome speech by my Massachusetts Senator Elizabeth Warren [D, MA]. Republicans across the country have tried to reverse abortion rights in Texas, Mississippi, Ohio, North Carolina and several other states. And in many states they’ve succeeded in reducing a women’s right to choose.

Slut. A despicable word. Degrading. The word is demeaning. Men use that word to dis-empower women. This rhetoric must stop. There’s nothing amusing about it. When did someone decide that casual sex was a negative? I’m 44 and I’ve been hearing this for decades. I’ve had more than a handful of sex partners and that’s my business. I’ve lost count of the number of a man I’ve slept with and that’s my business. I’ve had threesomes along the way and that’s my business. No one needs to know how many men I’ve slept with. I know who I am and what kind of sexual experiences I want and it’s my body and it’s my decision to have sex however I want with whomever I want how often I want. I have an IUD. I use a condom. I’ve never wanted to get married nor have children. That’s also my business.

Some might call me a slut. I’ve been called a hooker for wearing red patent leather shoes. We know there’s that double standard and it’ll always be there and however loud feminists yell and yell and yell we’ll never be heard. We are not sluts. A man can have sex with 100 women and he’s cool. A woman has sex with 100 men and she’s a slut. Virgin/whore. Few people want to be with someone who has zero sexual experience. Don’t believe that fantasy.

I haven’t had sex in a year. What are you going to call me now?

This entry was posted on October 7, 2013, 05:39 and is filed under Women/ feminism. You can follow any responses to this entry through RSS 2.0. Both comments and pings are currently closed.