18-year-old Sophie [Naomi Battrick] travels to Moscow for spring break with her friend Janie [Jemma Dallender] whose father is the U.S. Ambassador to Russia. Although her mother, NYPD detective Stevie [Julie Benz], worries about her a bit she knows that she’s staying at the embassy and should be safe. She tells her partner Jimmy Devlin [Jeffrey Meek]: “She’s grown up so fast. Now she’s wearing make-up and mini-skirts. I still have her Malibu Barbie Dream House . . . Seriously Devlin. What was I thinking sending my teenage daughter to spring break in Moscow?” Devlin reminds her: “It’s Janie’s dad they’re staying with. The point is it’s the U.S. Embassy they’re staying in. They have armed guards around the perimeter.”

Stevie and Devlin aren’t getting along so well at work. Devlin’s frustrated because he loves Stevie and wants more than the occasional hook-up and working together. He’s putting in for a transfer and tells her she needs to let go of the past, particularly her dead husband. Julie Benz plays emotionally damaged characters really well. I like this one better than her Dexter character because she’s a bit more independent and not as much of a doormat. Clearly Stevie’s got self-esteem issues and trust issues with men. 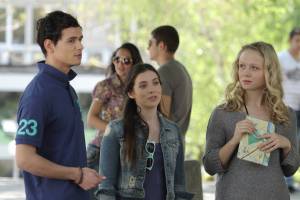 In Moscow after several days sightseeing, Sophie and Janie are restless to see a different side of the city. They meet a cute boy at a museum who gives them a card and his cell number and tells them he’s a concert promoter. “SMS me,” he says. That night the girls sneak out of the Embassy, head to the club where Bobby [Matvey Borushko] takes a picture of them and gets told by a shady dude working as the bartender that they’d garner twice the amount of money because they’re 18 and American.

He brings them shots and Janie drinks both of them without questioning the contents. Turns out they’re spiked and soon she’s almost passed out and tells Sophie she doesn’t feel well. Sophie helps her out of the club where some men surround them and put them into a van (later discovered have Russian mafia ties). Really liked that Sophie’s been well-trained as both a New York kid and the daughter of a police officer. When the men start to take her she dials her mom’s number and leaves the cell on while she uses self-defense methods to try to ward off the attackers as best she can. She also calls out the name “Bobby.” As soon as her mom gets that call, she’s in police detective and super mom mode– off to save her daughter in Russia.

Bobby, the young guy who befriended the girls, is handsome, charming so not someone who’d raise any red flags. It’s so important that young women see that anyone could abduct them. It’s not always some creepy, looking loner type. It could be someone they’d want to date. They both think he’s cute. They would never think he’d try to hurt them and that’s often how young women get into dangerous situations at nightclubs or fraternity parties etc. Well done on that casting Lifetime. A pretty face can be the face of evil. What scared me was that he took their picture and then went to consult with a guy at the bar and they said that they could get double the price because they were American and 18. Just chilling that people market people’s lives. That they buy and sell people without a second thought. 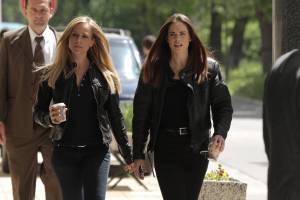 Sophie’s mom gets on the next plane to Moscow and starts searching for her daughter knowing — as with most missing persons cases–that she only has about 48 hours. CIA agent [Amy Bailey] assigned to the Embassy helps Sophie and quickly matters become dangerous as they involve both the Russian mafia and possibly the police. The movie goes off the rails when the CIA agent and Stevie started talking about the men they cared about but didn’t have much time for due to their careers. Not leaning in apparently. The CIA agent mentioned her Navy Seal’s last name and that it was almost a deal breaker. Really? You realize you don’t have to change your name. And then she asked Stevie about her guy and his last name and said it was a good last name for her name. Oh, Lifetime, you’ve come so far and yet still have so far to go toward the advancement of women and women’s empowerment and women’s equality. I guess what do I expect when popular shows include Devious Maids and Dance Moms?

This is a fast-paced, effective movie about the dangers involved with young women traveling abroad in Eastern Europe and Asia where sex trafficking’s become a massive money making industry where people’s lives are the commodities. People’s lives are ruined. People are treated as property. It’s scary and disgusting.

The U.S. State Department estimates that 27 million people are victims of human trafficking, many forced into sexual slavery and many never heard from again.

This entry was posted on September 20, 2013, 23:57 and is filed under TV. You can follow any responses to this entry through RSS 2.0. Both comments and pings are currently closed.