Amy Steele: How did you come up with the idea for this novel?

Andrew Sean Greer: In writing The Confessions of Max Tivoli and Story of a Marriage, the plots rely on the character being unable to make liberated choices, due to the times in which they live. That led me to be interested in how the same story would differ in three different time frames—same characters, same tensions, same situations, with only the year changed. I set out to write the book as a three-part novel, only to decide it would be intensely boring. That is when I decided to put all the stories on top of each other, and create a protagonist who would wake up in a different story every day, and be forced to adjust to how things were different. That person became Greta Wells.

Amy Steele: What interests you about time travel?

Andrew Sean Greer: Well, as the novel is about alternative realities, other worlds, I don’t think of it as time travel. It is more a novel of anachronism. Interviewers often ask me what time I would like to live in, and I have to say to them I’d like to bring my friend along, which means often my female friends would be unable to work, or vote, and my black friends unable to move freely, Chinese friends unable to reunite with their spouses. And as for me, as a gay man…well the past doesn’t look too pleasant. So I have an unromantic view of the past. Which allows me, I think, to enjoy it all the more in my writing.

Andrew Sean Greer: Gut feeling. Those time periods simply interested me. 1918 was always a fascinating moment, and I wanted a time period near the middle of the century. And I decided that, while I could put Greta’s world in the present day, if I set it in 1985, I would get an extra time period at no extra cost! Only then did their connections reveal themselves to me—two worlds at war, two worlds with plague, and so on. WIth this book, I followed and trusted my instincts far more than my brain.

Andrew Sean Greer: She is stubborn and vulnerable, she is a mute Cassandra, and she is, though very sad, capable of bearing witness to the beauty of places others take for granted, and for recognizing the possibilities thwarted in lives of those she loves. 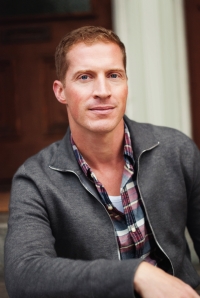 Amy Steele: Greta’s twin Felix is a major part of her life. What interested you in writing about twins?

Amy Steele: How would you describe Felix?

Andrew Sean Greer: Well, there are three Felixes, in three different worlds. 1985 Felix, who we see only in memory (as he is dead when the novel begins), is funny, brash, driven by a thirst for life. 1941 Felix is secretive, desperate and about to have a nervous breakdown. 1918 Felix is a mask of smiles and pat phrases, hiding a tormented inner life. They are all the same man, in the way that our different moods from different moments are all the same us. And, in a way, they are all pieces of me.

Amy Steele: The twins also have this wonderful aunt. She’s so open-minded and independent.

Andrew Sean Greer: I LOVE HER! She was a great creation to be able to put on the page. I know quite a number of women like her, and they are not always celebrated for their independence! Strong women suffer. And Ruth suffers, though you only see it in small moments. She also will not indulge self-pity in Greta. She has seen a lot, and only gotten through it with will and making everything into a funny story at a party.

Amy Steele: The reason why Greta travels is that she’s receiving electroshock therapy for depression. Why don’t you mention her depression at all? There’s no way she would be instantly “cured.” [and I’m speaking as someone who has clinical depression.]

Andrew Sean Greer: I don’t understand the question—the first twenty-five pages of the novel are devoted to describing her depression. Look at page 13. I, too, suffer from depression, as do most of my friends. I can’t imagine claiming anyone is cured. But my god, waking up in a new world, she is certainly distracted!

Amy Steele: You’re the son of two scientists. What effect did that have on your world view and your own education and career plans?

Andrew Sean Greer: They were also two people who came from poor, rural areas of the South, and books were what brought them out of those worlds. So books were always held up in my house as the greatest, most accessible kind of travel away from pain, and also the way to understand it. Is it any wonder I became a writer?

Amy Steele: You received your undergraduate degree from Brown University. Did you become interested in writing in college?

Andrew Sean Greer: I became interested in writing when i was ten. I wrote stories until I was 16, when I wrote my first novel. So no, my interested started long, long ago!

Amy Steele: What did you do at Nintendo? What kind of place was that to work at?

Andrew Sean Greer: I worked for Nintendo Power magazine, which was dedicated to helping American kids get through the very difficult game levels (seen by the company to be too hard for Americans). I had to win the games and document, in kid-prose, how to beat the game! It involved hours of gameplay, and my godsons thought I was the most amazing adult ever! Then I’d write the articles. I was hardly ever at the Nintendo campus except to talk to the game developers, who gave me maps and tips. It was so long ago that I got the job after answering an ad in the local paper!

Amy Steele: Where do you write?

Andrew Sean Greer: I have been traveling for a year and a half, so I’ve learned to write anywhere. I have friends who write in cafe on yellow legal pads. I have friends who write on a treadmill office in their house. I seem to prefer a small quiet internet-free room with a couch to nap on. But relying on “needing” something to write is just another form of procrastination—so whenever I develop a habit, I try to break it!

Amy Steele: This is the first of your novels I’ve read. What would you suggest I read next? Do you have a particular favorite?

Andrew Sean Greer: Well I hope it was a nice introduction! I think the next most similar, if you liked Greta Wells, is The Confessions of Max Tivoli. It, also, has a small magical premise, an obsessive love story, and an historical setting. And, like Greta, it is built to make a certain number of readers cry

Amy Steele: Thank you so much for taking the time to answer these questions, Andrew. I will definitely add your other books to my reading list.

This entry was posted on July 16, 2013, 21:54 and is filed under Books, Interview. You can follow any responses to this entry through RSS 2.0. Both comments and pings are currently closed.