Marjan Kamali, an Iranian-American author, moved to the United States after the Islamic Revolution in 1979 though she’s lived in Kenya, Turkey, Switzerland as her father worked as a diplomat. She’s since lived in Massachusetts, New York, California, Switzerland and Australia. She received an MBA from Columbia and an MFA from NYU. Together Tea, a delightful novel about an Iranian-American mother and daughter striving to find what makes them happy after leaving one home and attempting to fit in to another. Read my review here.

Recently I met Marjan for coffee/tea to speak about the novel and her background. 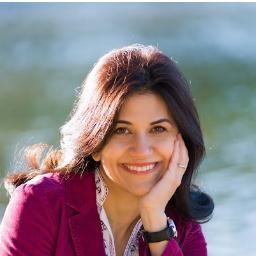 Amy Steele: Have you always wanted to be a writer?

Amy Steele: When did you decide to write this book?

Marjan Kamali: I came to the U.S. as the child of immigrants. Writing wasn’t considered an option as a career because it wasn’t considered professional or stable or lucrative. The choice was a doctor, a lawyer or an MBA. So I pursued an MBA but the entire time I was there I wistfully looked at the MFA program. They wouldn’t let me do a double-major so that’s how NYU came about.
And because I had a liberal arts background when starting my MBA they put us in “Math Camp” and introduced us to Excel. I saw the spread sheets and thought what if a mother used this to find suitable matches for her daughter. I started writing the story. That was over 10 years ago.

I did put it aside because I was doing the double degrees and found I was having a baby and then went back to school and had another baby and we moved to Australia. So I put it aside for six years. After my youngest child was in kindergarten, I retrieved it and started revising it.

Amy Steele: How did the Islamic Revolution affect your family?

Marjan Kamali: I was living abroad because of my dad’s job. After the revolution in 1979 we went back because at that time it was considered a time of democracy but it soon became clear it wasn’t moving in the way many had hoped. It was becoming a theocracy and not a democracy. I was there between the ages of 9 and 10 ½. A lot of the scenes that occurred in the early 80s, I was there then so that’s how I got those scenes.

Amy Steele:: How autobiographical is the novel?

Marjan Kamali: I would say it’s semi-autobiographical. My mom never made spreadsheets to find me a husband but I was in Iran during the war so the schools changing and things like that.

Amy Steele: What do you think are the greatest misconceptions people have about Iran?

Marjan Kamali: I feel the biggest one is that people have a really short-term memory. 34 years in the history of Iran is very short. There are these Islamic fanatic and negative images on the media of people who hate America. I think the biggest misconception is that Iranians hate America because they don’t. They’re thrilled to see anyone from America. They want more of America and they can’t have it.

Amy Steele: You start out with Darya trying to set up Mina in a marriage. Is that common?

Marjan Kamali: Arranged marriages aren’t common. Even today it’s what you and I would call a blind date. There’s a word for it in Farsi and it means that if you’re a young person of a certain age and I know someone of a certain age who would be suitable, I set you guys up to meet. When it’s done by the parents, it’s more official. The man comes over to tea to meet the young woman. If they like each other, another meeting is set up. If not, nothing becomes of it. It’s matchmaking.

Amy Steele: Did you develop the story first or the characters?

Amy Steele: What drew you to writing?

Marjan Kamali: I always read. Once I was in high school my English teachers encouraged me. I wrote a short story as a junior in high school that my mom sent to a contest. I kept getting feedback from really good teachers. It was never really a love of writing but a love of reading and others were encouraging. 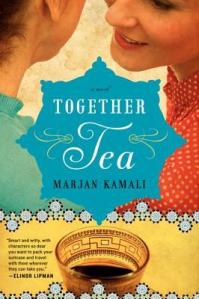 Amy Steele: Why did you want to write this story?

Marjan Kamali: I believe there are two Irans. There is the Iran that we see in the media and then there is the real Iran. Adjusting to American life, trying to find a sense of home, and culture shock are common challenges for most immigrants. But Iranian immigrants have the additional charge of explaining or correcting negative representations of their home country. When I was an undergraduate, books like Maxine Hong Kingston’s “The Woman Warrior” and Toni Morrison’s “The Bluest Eye” made me understand the Chinese-American and African-American experience better through fiction. I wanted to find similar novels about Iranian Americans. So I decided to write a novel that shows the beauty, frustrations and joy in a Persian family. Iranians are often drawn with such a broad brush – I wanted to try and provide more nuanced, colorful strokes.

Marjan Kamali: This passage seems to have struck a chord with readers. It gets quoted in reviews the most and was read on NPR WBUR’s Good Reads program. It happens to be one of the autobiographical passages in the novel. I was putting into words how I had felt for so long. “She knew how to swing her legs on that hyphen that defined and denied who she was: Iranian-American. Neither the first word nor the second really belonged to her”. Mina, like many hyphenated Americans who live between worlds, is a foreigner when she goes to her “home” country and isn’t always quite at home in the U.S. either. She tries to find a balance for years. “The hyphen was hers – a space small, potentially precarious. On the hyphen she would sit and on the hyphen she would stand and soon, like a seasoned acrobat, she would balance there perfectly, never falling, never choosing either side over the other, content with walking that thin line.” Ultimately, Mina realizes that her sense of belonging doesn’t need to come from a place or ethnicity. Rather than being a limiting small space, that hyphen is actually a bridge between cultures and Mina finds her home on that bridge and in her art and in her relationships.

Amy Steele: How difficult was it to get out of Iran during the revolution? Some people stayed. Why?

Amy Steele: Can you explain the title?

Marjan Kamali: The title is actually a phrase that my Farsi-speaking mother-in-law uses when she speaks English. She says “Would you like to have together tea”? I used this phrase as the title because tea is such a huge part of Persian life – it’s usually brewed (with great care) on a samovar and people drink it all day long. Throughout the novel, many characters meet over tea and pivotal conversations between Darya and Mina, Darya and Sam, Mina and Ramin, Darya, Parviz and Sam etc. are had over tea. Also, I wanted to use the word “together” to indicate the bridge between Iran and America. We have so much in common, despite the political rhetoric.

Amy Steele: Both Darya and Mina are strong women. What do you like about them?

Marjan Kamali: I love that Darya speaks her mind. She is judgmental and she knows it but she’s old enough to not care what others think. Her generation is one that was steeped in tradition and she was raised to respect her parents’ choices, to marry someone of whom they approved, and to establish a stable, secure life where one kept one’s head low and did not rock the boat. But she doesn’t suffer fools gladly and she is a very headstrong, determined, and talented woman. Because of Iran’s tumultuous politics, both Darya and Mina have experienced regime change (Darya’s generation were children during the ouster of Mossadegh and installment of the Shah in 1953 and Mina’s generation were kids during the 1979 Islamic revolution). Both know political upheaval first hand and see that stability and security are temporary. But whereas Darya’s response is to keep a low profile and hang on to safe and secure choices, Mina’s, due in large part to her exposure to Western culture, is to ultimately follow her bliss, despite the risks. This is where Darya and Mina differ the most. But I love and respect Darya’s decisions to keep her family safe and I think her choices in life show strength, even if they are choices of compromise. Mina, too, makes many compromises – but in the end she chooses her passion and I respect this greatly about her. I love that she manages to carve her own path without being a clichéd “rebel” who rejects her parents. Mina is trapped in a way, between her parents’ desires for her and her American opportunities. But she manages to balance both, hard as it is, and I love this about her.

Amy Steele: You mentioned potential unfulfilled and that this appealed to you as a writing topic. Why?

Marjan Kamali: I grew up aware that a lot of adults regretted not pursuing their passion. There was plenty of excellent talent that had not been put to use due to circumstance, revolution, war, laziness, what have you. It made me fascinated by the idea of not fulfilling your potential and living a life of regret. No person who has reached middle age is a stranger to unfulfilled dreams, failed ambitions, or missed opportunity. But the idea of having a true talent and not pursuing it, like Darya’s talent in mathematics or Mina’s talent in art– the idea of having to neglect your passion due to life’s circumstances or your own choices has always fascinated me. It’s what happens when lives are cut short and when lives are not lived to the fullest. It is what happens when people can’t muster up the courage to pursue their real desire or don’t have the circumstances that can make that happen. Potential unfulfilled is a great loss and if someone is able to actually live up to their potential, that is the greatest gift of all. That privilege, duty, and gift of living up to your potential is the theme I wanted to explore in Together Tea.

Many thanks to my new friend Marjan Kamali. Definitely add Together Tea to your summer reading list. You won’t be disappointed.

** ECCO/Harper has also agreed to give away one copy of the novel to U.S. residents, if interested please leave your email in the comments. Contest closes August 8.

This entry was posted on July 15, 2013, 02:48 and is filed under Books, Interview. You can follow any responses to this entry through RSS 2.0. Both comments and pings are currently closed.