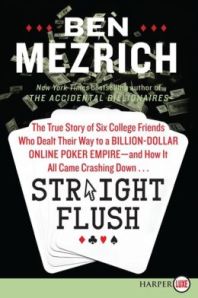 Another creative nonfiction book from Ben Mezrich [The Accidental Billionaires, Bringing Down the House] illustrating the new money, lavish lifestyle for a group of fraternity brothers from University of Montana. The guys develop the online poker site Absolute Poker while living as expats in Costa Rica. If everything these guys were doing was legal why re-locate to Costa Rica? Mezrich writes: “Costa Rica seemed the natural first choice. Paradise Poker was located there—and in addition, the country seemed to be ground zero for the online sports book business. Which meant there would be lots of experienced people who knew the tech and the industry. As with many Central and South American countries, Costa Rica could also provide cheap labor—but in Costa Rica, that labor would be well educated.”

The business remains shady throughout the book. Within years the company starts netting six figures per day. The guys travel the world, party, hook up with hot “girls” [Mezrich never describes talented, intelligent women in his books. He even writes: “there was hardly a week when there wasn’t some gorgeous thing in his bed.”], buy sports cars, motorcycles and drugs. On April 15, 2011 the US Department of Justice raids Absolute Poker along with two other major online poker sites. Congress passed new legislation designed to take these operations down. Nothing would be the same again.

This is the fifth book I’ve read—my favorite is Rigged—about a guy who made a ton of money in oil futures. What fascinates me more tends to be the idiotic spending and partying. Mezrich rarely chooses to write about do-gooders like Bill Gates— millionaires who want to eradicate polio or actually help society. Instead he thrives on the playboy stylings in his books [for this one he did travel to Antigua to interview an Absolute Poker’s founder]. He sexes the stories up as much as possible. Why do I keep reading these sexist tales of hedonism and treachery? Not sure. Mezrich can spin unequivocally entertaining based-in-reality tales and clearly has a type and a formula for his success. I occasionally want a page-turner. It’s a solid choice for summer reading.

This entry was posted on June 21, 2013, 19:41 and is filed under Books. You can follow any responses to this entry through RSS 2.0. Both comments and pings are currently closed.