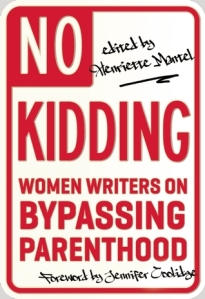 As with many essay collections, these selections present a mixed bag of experiences, memories and opinions. I was disappointed by No Kidding. Many writers, most of them comedians or working in television/entertainment industry in some capacity, were unknown to me. Choosing not to have children, not to marry, not to follow societal norms pushes someone to the fringes. When women get to that certain age, people expect women to be wanting children or wanting a family life. There are plenty of women [and men] who make enlightened and personal decisions not to have children. This shouldn’t make them outcasts. Most of the essays were standard, predictable fare. These women stressed how successful they’ve been career-wise. Couldn’t be possible they say. Few essayists said that either way, children weren’t for them. That probably takes the most guts to do. Writing about being too busy to do something or not getting around to it because you’re too busy with a career makes the sharing easier. I’ve known I didn’t want children since I was 12! The best piece and one I could most relate to as someone who chose not to have children: “The Plus of Child-Less” by Cheryl Bricker.

“I consciously decided early on (seriously . . . like preteen) that I had other priorities for my future and that adding children to the mix would be impractical and, quite frankly, undesirable. I was never great at fulfilling societal expectations.” –Cheryl Bricker

A few other thoughts on not having children:

“I have pushed a lot of things in my life, but I never pushed having children. Partly because I could never imagine raising a child alone and partly because my choices in men have always been just this side of serial killers. But most of all, I never had the gotta-have-a-baby visceral craving that ruled so many of my friends.” –Henriette Mantel

“Jack never explained why he refused to believe I didn’t want kids. Perhaps, like many people, he assumed that if you had estrogen coursing through your body, you would naturally want to own a Baby Bjorn.” –Bonnie Datt

“I no longer believe that everyone who is married has fallen in love, or even wanted to.” –Laurie Graff

FTC Disclosure: I received this book for review from Seal Press.

This entry was posted on May 28, 2013, 19:20 and is filed under Books, Women/ feminism. You can follow any responses to this entry through RSS 2.0. Both comments and pings are currently closed.