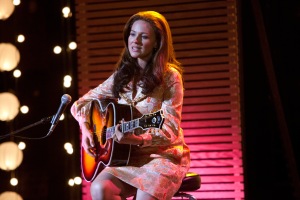 Apart from her famous spouse Johnny Cash, June Carter led an intriguing musical life. The first 20 minutes of the movie show June’s early singing career with her mom “Mom Maybelle” [played by the talented Frances Conroy] and the Carter Family. It glosses over the years she sang with her sisters and her own vaudevillian comedic/singing act. More of June’s life pre-Johnny would’ve added depth and range to this movie. Anyone who saw Walk the Line will recognize June Carter Cash’s story — the decades-long romance between June Carter [Jewel] and Johnny Cash, particularly the rocky times when Johnny Cash struggles with his addiction to pills.

During a show at The Grand Ole Opry, June meets Johnny Cash backstage. Six years later she’s on tour with Cash and married for the second time. One night, June comes home to her race driver husband. She sends him off to bed and stays up writing “Ring of Fire” on her acoustic guitar. There’s not quite enough chemistry between Jewel and Matt Ross. It’s not palpitating as one expects. If June Carter’s driven to write a song about Johnny Cash while her husband sleeps, audiences need to see it, feel it on the screen and it’s just lacking. Also the movie doesn’t get into her first two marriages and her daughters hardly garner enough screen time for credits. Based on the book Anchored in Love: An Intimate Portrait of June Carter Cash by John Carter Cash, the movie focuses on June’s relationship to her son and not to her daughters from previous marriages. 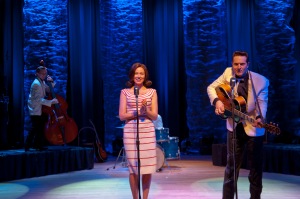 Jewel sings confidently and brings tenderness to the role. She’s putting in the effort to show emotional range. There’s a particularly effective, moving scene when June finds Johnny at home extremely high with things smashed completely around him. She packs her things to leave with their son John Carter who discovers his father passed out. June holds an intervention in his hospital room. Directed by Allison Anders [Grace of My Heart], the movie’s got heart with some vibrant musical segments; it just needed to delve a bit farther in order to show more facades to June.

This entry was posted on May 27, 2013, 16:12 and is filed under Music, TV. You can follow any responses to this entry through RSS 2.0. Both comments and pings are currently closed.