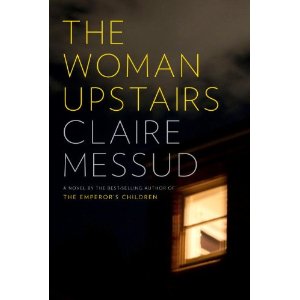 “How angry am I? You don’t want to know. Nobody wants to know about that. I’m a good girl, I’m a nice girl, I’m a straight-A, straight-laced, good daughter, good career girl, and I never stole anybody’s boyfriend and I never ran out on a girlfriend, and I put up with my parents’ shit and my brother’s shit, and I’m not a girl anyhow, I’m over forty fucking years old, and I’m good at my job and I’m great with kids and I held my mother’s hand when she died, after four years of holding her hand while she was dying”

The Woman Upstairs is such a brilliant novel about anything but that typical woman upstairs. Women can relate to this woman at whatever stage of life we might be. We know her. We recognize aspects of her in us and in our aspirations present and past, realized and forsaken. She’s not really hiding or sulking or quiet. An elementary schoolteacher who truly wanted to be an artist, she just made more realistic choices in her life but continued to paint and practice her art on her own. She says of herself—“it explains so much about me, too, about the limits of my experience, about the fact the person I am in my head is so far from the person I am in the world.”

Just because you don’t sell or show your art are you not an artist? How many creative people manage to become mega successful or make money from their talents? Usually someone has to have a day job or some sort of non-creative work to make a living and then do what one loves on her own time. If all works out well then she gets to do what she loves and make money from what she loves too.

Nora wanted romance and her own children but didn’t have them for one reason or another. She’s been doing the right things all along and now finds herself rage-fueled and frustrated and seeing in others what she wants for herself. She meets the Shahid family—a dreamy Euro-MiddleEastern blend of artistry and intellect– and falls hard for them. Reza is a student in her class, his mother Sirena, a talented artist. A working artist. One who exhibits her work in Paris and sells her art which people write about and discuss. They’re here for a year as Skandar, Sirena’s husband, teaches at Harvard.

While she might want to be Sirena and be with Skandar, she falls for each of them in different ways and perhaps wants to just infiltrate the family and be accepted by them and loved by them as she grows to love and depend on them. Sirena asks Nora to share a studio with her. No one may ever see Nora’s artwork as they’ll see Sirena’s grand Alice in Wonderland extravaganza.

Nora finds validation in this as she creates her miniature doll houses representing the inner lives of Virginia Woolf [“her last note propped upon the mantelpiece”], Alice Neel [“the sanatorium suicide ward . . . to make my Alice’s room reflect only the nadir, her darkest isolation, when she felt forsaken by life and by art and by love.”], Edie Sedgwick [“For Edie, beautiful Edie, the strangeness was that the joy was already in the room, even as it was killing her.”]. Emboldened one night she dresses as Edie Sedgwick, becomes Edie and goes out, gets terribly drunk, returns to the shared studio and enters Sirena’s Wonderland in a blissful daze. [“I was in my life, in life. I was alive.”]

“Or I imagined grandly showing Sirena my artwork in a fashionable Spartan gallery that had courted me, while craven young girls in black looked on, awed, from the sidelines. I knew even as I had them that these dreams were impure—after all, the whole point of the Shahids, for me, had been to escape a world of pretending, to be seen for who I really was—but I couldn’t help it: their natures, you could say, had corrupted me. My need for their approval, and my understanding of what approval meant to them—this had changed the shape of my self, even, let alone of my dreams.”

What’s enough for Nora? She wants an all-encompassing friendship with this family. Nora wants them to think about her and value her as much as she’s come to value them. But they don’t. She’s just an infinitesimal part of their dynamic international lives. When Nora discovers that she’s just another American that they’ll leave behind in several months it starts to corrode her soul. Years later the family still haunts her dreams. Angered by being abandoned, Nora plans a European trip around a visit to the Shahids in Paris. The near perfect ending will both shock and satisfy readers.

I first discovered Claire Messud with her engrossing novel The Emperor’s Children where three female friends navigate Manhattan while managing their complicated careers and relationships post-9/11. She’s a strong feminist voice and creates compelling characters. As with The Emperor’s Children, The Woman Upstairs drew me in from page one.

FTC Disclosure: I received this book for review from Knopf.

This entry was posted on April 9, 2013, 15:56 and is filed under Books. You can follow any responses to this entry through RSS 2.0. Both comments and pings are currently closed.