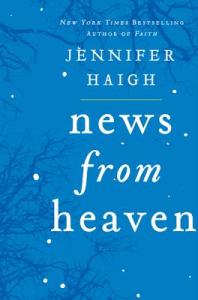 When she wrote her second novel—the authentic and riveting Baker Towers, Jennifer Haigh created the fictitious mining town Bakerton, Pennsylvania with memorable characters and a strong sense of place. In her new short story collection, she returns to Bakerton. It’s the type of small mid-Atlantic state town where people stay and pursue the same blue collar jobs generation after generation, where they die from black lung disease, where they marry their high school girlfriends and boyfriends often because of pregnancies and where dreams don’t travel far beyond the town’s borders. Those who move beyond Bakerton’s jurisdiction tend to become outsiders. Or they look back with melancholy and regret. It’s rather bleak and very small town America.

A girl meets her aunt, merely 12 years older than her in “Broken Star.” She enjoys the company of this cool older woman yet doesn’t understand her mother’s tepid attitude until she learns years later her aunt was her sister in need of a kidney. “Favorite Son” encapsulates Bakerton’s changing landscape and communal dreams through the dashed post-high school football career of a star athlete. What I like best about “Favorite Son” is the narrator. I made an incorrect assumption. How fantastic when that happens.

“I was that young once, Agnes thinks, but it isn’t true. At fifteen she was middle-aged already. She is younger now than she was then.”
–“Thrift”

“Thrift” is a marvelously peculiar story about a 50-year-old woman who never left Bakerton. Agnes saved her money working as a nurse. Took care of her ailing miner father. After her mom died she worked at the hospital and lived in her parents’ house until one day she met the much younger Luke. Her sister doesn’t trust him. Agnes maybe doesn’t know better or doesn’t care. She’s enjoying herself.

“His whole life, he’d believed there were two kinds of men: the kind who’d fathered him and the kind who’d raised him; men who took advantage of their freedom and men who threw it away; men who lived big lives and men who were content being small.”
“The Bottom of Things”

My favorite story might be “The Bottom of Things” which best describes that struggle between being comfortable with the familiar or breaking the cycle of small town suffocation to become successful. News from Heaven is a collection to be savored and treasured. Keenly observant and sophisticated.

This entry was posted on January 28, 2013, 14:49 and is filed under Books. You can follow any responses to this entry through RSS 2.0. Both comments and pings are currently closed.