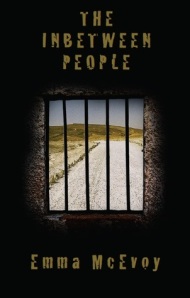 “It’s not about individual happiness, he said. It’s about the collective happiness of the community. You must remember that.
And with those words we became the inbetween people . . .”

This is a stunning novel. I needed to let it settle with me. It’s a challenge to adequately describe its beauty and potency. Avi Goldberg writes from military prison because he refuses to serve in the Israeli Defense Forces [IDF]. He writes about his friend Saleem, an Israeli Arab he met. Their lives intertwine despite cultural differences and past troubles.

Avi grew up on a Kibbutz with a British father and Israeli mother who deserted him when he was quite young. Saleem grew up as an outsider on his own ancestral land. After serving in the IDF, Saleem died. His young wife visits Avi in prison. She’s worried she’ll be forced to marry Saleem’s brother out of tradition. Something she cannot do. She urges Avi to consider gaining a British passport to leave Israel to marry her and start a new life.

First time novelist Emma McEvoy lived on a Kibbutz in Israel after university and before moving to Ireland with her family. As the story unfolds with dramatic flair, McEvoy effectively utilizes letters and flashbacks to highlight the misfortunes and bond between Avi and Saleem. Both men understand the reality of fighting over land. Fighting over religion and dogma. Both men know bigotry and hatred. Know deception, fate and tragedy. Exquisite prose haunts you and urges you think about the characters, the landscape, the country, its people and its troubled history.

This entry was posted on January 14, 2013, 23:38 and is filed under Books. You can follow any responses to this entry through RSS 2.0. Both comments and pings are currently closed.