The Death of Bees: book review 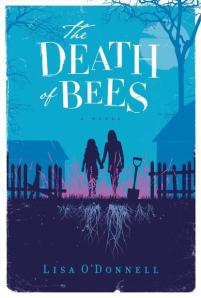 “Today is Christmas Eve. Today is my birthday. Today I am fifteen. Today I buried my parents in the backyard. Neither of them were beloved.”

The Death of Bees isn’t a difficult read, moving quite quickly with short sentences, short chapters and rather scrappy yet convincing characters. It’s narrated by three people: 15-year-old Marnie; 12-year-old Nelly and their desolate neighbor Lennie. Sometimes I felt the novel had a YA voice.

Marnie and Nelly struggle at an age where it’s complicated for most girls to develop their identities. Their often absent and drug addled parents leave them too often to fend for themselves. Living in near poverty in a Scottish town, Marnie and Nelly faced unimaginable abuse and neglect. Book smart Marnie earns fantastic grades but often gets in trouble at school for wearing mini-skirts and partying with friends. She has noteworthy friends—one with bipolar disease, a lesbian, a married drug dealer. She tries her best to protect younger sister Nelly, a violin prodigy and avid reader.

As the novel opens it’s unclear whether Marnie killed her parents or not. When neighbor Lennie, himself with a sketchy past (accused sex offender), takes Marnie and Nelly under his care, I began to root for the eclectic trio. Maybe Marnie and Nelly could make it out of this small town. Will anyone notice the deadbeat parents are missing? Turns out drug dealers want their money. Can sisters Marnie and Nelly truly manage on their own? Western society eventually notices and regulates orphaned or abandoned children.

As more characters impede Marnie and Nelly’s future, the novel hit a few snags. The dog trying to dig up the bodies in the garden seemed straight out of a tired ridiculous comedy. Drags a foot into the house. Is that a foot? Plus too many false endings and near misses when Marnie and Nelly seemed in the clear. Ultimately I wanted The Death of Bees to be darker and more intense.

This entry was posted on January 7, 2013, 15:35 and is filed under Books. You can follow any responses to this entry through RSS 2.0. Both comments and pings are currently closed.