Anyone interested in seeing Lindsay Lohan’s ongoing train-wreck will watch Liz & Dick on Sunday, November 25 on Lifetime. Lindsay Lohan isn’t credible as Liz Taylor. She doesn’t look like her. She has freckles and a fuller face, a bonier frame. She doesn’t even attempt to have the same softer, lilting accented voice. This is LiLo playing dress up. Large breasts and childhood stardom seem the only commonalities between Lindsay Lohan and Elizabeth Taylor. Lohan’s surely no sex symbol at 26. After years of turmoil, you’d think Lohan would put a bit more effort into her portrayal of a legend.

The movie suffers from poor direction, lazy acting, an awful screenplay and of course terrible casting. There’s zero chemistry between Lindsay Lohan and Grant Bowler who plays Richard Burton. Grant Bowler looks nothing like Richard Burton. It’s almost laughable if it weren’t so sad. When you watch Cleopatra or Who’s Afraid of Virginia Woolf? the palpable attraction between the pair can be felt by viewers and that’s why the couple completed a dozen films together. Liz & Dick fails to convey the magnitude of this relationship. The fights. The attraction. The purported love. Liz Taylor said that she had three loves: Mike Todd [her third husband, who died]; Richard Burton and jewelry. 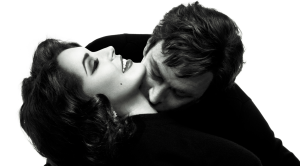 The story of Liz Taylor should be told. She’s a fascinating woman. And surely beyond her years with Richard Burton. Of course this 1 ½ hour Lifetime movie just skims the surface of that relationship anyway. Liz supposedly stole married men. She’s married to Eddie Fisher [who had been married to “America’s Sweetheart” Debbie Reynolds when he met Elizabeth Taylor] when she meets Richard Burton on set of Cleopatra. There’s no spark, nothing in the scene between Lohan and Bowler. Richard says: “Has anyone ever told you you’re beautiful?” Lindsay as Elizabeth just shakes her big head and stomps away screaming. It’s rather uncomfortable instead of charming. From what I’ve heard Richard Burton and Elizabeth Taylor were always arguing and making up in some sizzlingly erotic manner until Richard became too jealous of Elizabeth’s success and fame.

The only positive of Liz & Dick is that I would like to see a decent film about Elizabeth Taylor’s life. About her philanthropy, her work with AIDS research and fundraising, her children [I often forget she has any], the timeless films [A Streetcar Named Desire, A Place in the Sun, National Velvet, Cat on a Hot Tin Roof] her numerous marriages, her many friends and illnesses. This movie merely brushed the surface.

This entry was posted on November 22, 2012, 15:13 and is filed under Uncategorized. You can follow any responses to this entry through RSS 2.0. Both comments and pings are currently closed.