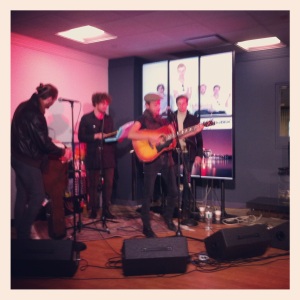 Wolf Gang earlier Live in the Lab at RadioBDC

Wolf Gang is clearly in sync with each other and get a kick playing together, quite evident during every song they perform. They make it all appear fun and rather effortless. Wolf Gang performs outstanding versions of “The King and All of His Men” as well as “Lions in Cages.” The new song “Horizons” rocks with catchy and moving harmonies. They mix it up live. “Where are You Now?” starts off slow and leads to a kicky rock beat and strong vocals. There’s a bit of 70s rock in their songs like on ballad-type songs, such as title track “Suego Faults.” The crowd loves every moment, dancing and swaying and cheering. Just the way an indie rock should be.

Be sure to catch Wolf Gang on tour if you can:

This entry was posted on October 28, 2012, 02:30 and is filed under Music. You can follow any responses to this entry through RSS 2.0. Both comments and pings are currently closed.