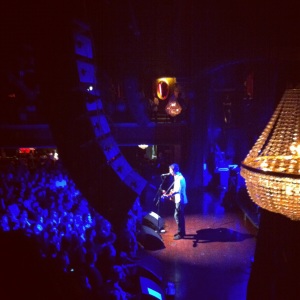 A charming, handsome and confident Frank Turner played to a sold-out crowd at Royale Boston Friday night. He immediately captivated the audience [2:1 male: female] with his commanding vocal range and protest-folk-pop songs. He effused high energy with “The Road,” “I Still Believe,” and “Try This at Home.” He reminds me quite a bit of younger John Wesley Harding. Turner uses his music and the stage for the greater good by espousing a message of equality, freedom and fighting injustice. He’s persuasive, electric, sharp. Guys want to be him. Girls want him. He can shift gears and slow it down in a romantic, beautiful way with songs like “Eulogy,” and “Vital Signs.” He interacts splendidly with the audience whether to pump them up to dance or announcing to cheers that Boston it’s his favorite city to play. And I’m positive he’s genuine. It’s obvious he’s a smart guy, a brilliant songwriter and a talented performer. Local openers Larry and His Flask brought an entertaining, controlled chaotic feel and are worth seeking out.

This entry was posted on September 8, 2012, 19:30 and is filed under Music. You can follow any responses to this entry through RSS 2.0. Both comments and pings are currently closed.