One of my favorite albums this year is definitely Cardiology by Sara Jackson-Holman. It’s theatrical, innovative and intricately creative. Jackson-Holman’s distinctive voice propels the emotionality in each song. She’s a classically trained pianist from Portland, Ore. I recently interviewed her via email. 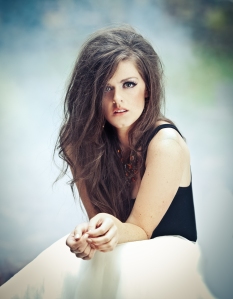 Amy Steele: Your songs are so dramatic and have so many layers to them. How do you develop a song?

Sara Jackson-Holman: It depends. Sometimes, it starts with a beat, sometimes with a melody, sometimes with a piano pattern. I keep adding things until I feel that it is conveying the right emotion–which is when I feel like the song is complete.

Amy Steele: This entire album is all about the heart—it’s basically a theme-based album? How did you
come up with this idea?

Sara Jackson-Holman: The process was very organic. I was writing songs in these separate little moments of my life throughout the course of a year, and when I compiled them to one list, they created a sort of journey through my emotional experiences.

Amy Steele: You started playing classical piano at a young age. What do you like about classical music?

Sara Jackson-Holman: Its diversity, its complexity. Its sense of melody, use of countermelodies. I love the drama, and the universality of it. It’s foundational.

Amy Steele: How did studying piano and writing in college affect your songwriting?

Sara Jackson-Holman: I think songwriting became a sort of escape, really. At that point in my life, I was really done with structure and so songwriting allowed me to do something that was completely my own, and to be creative on my own terms. To experience music this way was freeing. The performance aspect was also drastically different. Performing classically, the room is silent, the applause polite, and there aren’t many allowances for mistakes– there is this sense of your performance and interpretation of a piece constantly being compared to others. It’s a very rigid environment, whereas performing pop music is more relaxed. People smile at you when you perform, they are enthusiastic. I love that.

Amy Steele: Is it a difficult transition [from classical music to alternative or pop music]?

Sara Jackson-Holman: Not really– if anything, the structure of classical music has been really helpful to me in my songwriting. It’s been this process of meshing what I know with what I love listening to (dark pop/hip hop). Incorporating classical music in a modern and relevant way is fun for me.

Amy Steele: You have unusual vocals. How did you learn how to sing and/or gain the confidence to sing?

Sara Jackson-Holman: I didn’t actually sing for a long time. After being too shy to sing in my younger years, I was extremely involved in my high school’s choir, but not really as a soloist. I think when I first started writing songs, I felt that I could express myself in a unique way. The support I received from family and friends as I ventured into songwriting gave me the confidence I needed to really pursue music. I’m grateful for that support, I’m very fortunate.

Amy Steele: What inspires you to make music?

Sara Jackson-Holman: Aside from writing music to work through my feelings, I write music to communicate with people. I’m shy, I don’t care for superficialities, but if I can connect with someone in a significant way, or write a song that resonates with someone, that they can claim as their own, I feel I’ve been successful.
There is the sweetest couple who come to many of my shows, and they say “their song” is “When You Dream” off my first album. Which is definitely inspiring. 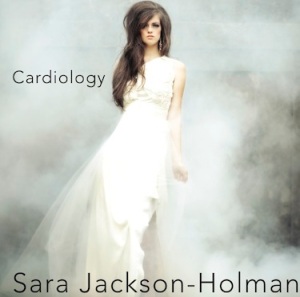 Amy Steele: Tell me about writing the songs:

Sara Jackson-Holman: I wrote this song in January, about a week after my grandfather passed away. It was written as a way to process my grief– this was the first of a few songs that I wrote (followed by Come By Fire, Freight Train, then For Albert), and is definitely the darkest of them. I honestly couldn’t really identify what I was feeling at the time, except through music.

Sara Jackson-Holman: This was actually the first song I wrote on Cardiology. It’s about the stages you go through (or at least, that I go through) after a break up– sadness, wondering if you’ve just wasted a part of your life, wanting to move on.

Sara Jackson-Holman: This song takes me to July– 90 degrees, blue skies, the languid feeling of summer. I felt very relaxed and content while writing this song.

Sara Jackson-Holman: This song took me the longest of any of my songs. I think the garageband version of the song had something like 45 tracks. I wanted to write a heavy pop song with orchestral elements, and To Be Bright was the result.

Amy Steele: What has been your favorite part of your music journey so far?

Sara Jackson-Holman: I’ve loved everything. I love the song-writing process, I love the recording process, I love performing. During each of these separate processes, I always say, “this is my favorite part, this is why I’m a musician”. So it’s hard for me to choose a favorite– perhaps performing because of the people, I love singing to people.

Amy Steele: Thank you Sara! See you on twitter. . .

This entry was posted on July 26, 2012, 19:33 and is filed under Interview, Music. You can follow any responses to this entry through RSS 2.0. Both comments and pings are currently closed.