The Lion is In and Guts: quick book reviews

So impressed by both books. Now need to spread the word. And clear space on my (limited) bookshelves.

“Tracee got her into this mess and now Tracee’s gone wiggy over a guy who thinks visiting furniture stores is a fun way to spend a Sunday.”

Three troubled women walk into a tired club in North Carolina. Could there be a joke in that? Tracee chronically shoplifts. Lana is an alcoholic. Rita fled her stifled life as a minster’s wife. This story could veer off in numerous directions but under the deft storytelling skill-set of Delia Ephron, it weaves together in a wondrous fashion. This run-down bar, an aging lion and their relationships with each other help them in a myriad of ways. A delightful, magical read. It’s warm and touching and amusing– all the things one wants in a novel. It’s the kind of book you read in one weekend or sitting because you just don’t want to put it down.

purchase at Amazon: The Lion is In 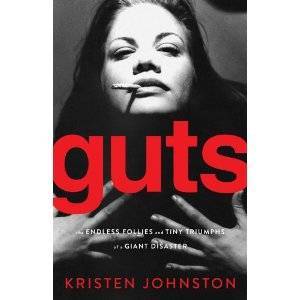 “A huge percentage of the recovering drug addicts I know seem to have a few things in common, other than their disease: intelligence, creativity, individualism, humor, and yes, they all seem to have or have one had enormous amounts of ambition.”

I always thought Kristen Johnston seemed pretty cool with her gangly body and gravelly voice. I’d watch her on Third Rock from the Sun. Now after reading her memoir I think she’s quite amazing. Guts is honest, self-deprecating and wonderful. Johnston doesn’t consider herself a celebrity [she refers to herself as a B-list celebrity actually] but a hard-working actress and acting teacher which differentiates this memoir from other celebrity memoirs. She gets dirty and detailed particularly when she describes the destruction drugs caused to her digestive system. A surgeon told her that her drug use caused “erosion of the gastrointestinal wall, which has led to your intestinal content spilling into your abdominal cavity.” Brave writing. Funny at times too.

purchase at Amazon: Guts: The Endless Follies and Tiny Triumphs of a Giant Disaster

This entry was posted on April 5, 2012, 21:19 and is filed under Books. You can follow any responses to this entry through RSS 2.0. Both comments and pings are currently closed.