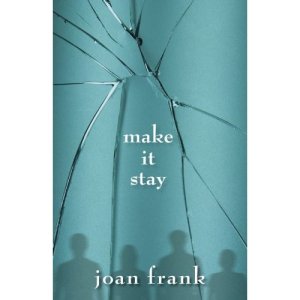 It was one of those afternoons the townspeople cherish about autumns here: sky a deep, aching blue, motes of gold in the air—so lovely, Cass allowed to Neil, she had considered taking the day off. Leaves had begun to flush crimson, wine, umber; days filled with a warm-sugar smell. Around and through lazed scents of cola, hot pretzels, smoke from leaf fires (still legal), cut-grass, geraniums. Tips of trees barely stirred.

As a Muriel Spark fan I like short novels. They’re not easy to write. a writer must possess exemplary writing skills. There’s less time for character development, establishing setting and point of view so the writing must be precise and solid. Make It Stay contains lovely writing and vivid descriptions. Author Joan Frank writes exquisitely and unpretentiously. No need to read this novel with a dictionary at the ready but it’s not overly simple either. The sentences are so well-crafted that I wanted to re-read many of them and sometimes did.

Neil, now married to Rachel, is best friends with Mike who is married to Tilda. At the beginning of the novel, the reader finds Neil and Rachel preparing for a dinner party. Rachel asks Neil to tell him about Mike and Tilda. Rachel likes Mike well enough and perhaps mostly due to her husband’s long-lasting friendship with him. She doesn’t particularly care for Tilda. The rest of Make It Stay elucidates Neil and Mike’s friendship, Mike and Tilda’s marriage and Neil and Rachel’s marriage.

They are seated before someone’s desk, as if they were applying for a loan when the camera caught them. Mike, of course, is a smirking satyr, ready for mischief and excess. Tilda looks wary, hair the same lank brown, still cut like a friar’s, as if the scissors had traced the rim of a shallow bowl placed at the back of her head. You could not call her beautiful, but her face had the smoothness of youth, her features pert. A kind of cute tomboy, except for the affectless gaze—unblinking.

The story of Tilda and Mike bears resemblance to Edith Wharton’s Ethan Frome. It’s that twisted and dark. Tilda’s dour and, according to Rachel, rather smelly—suffering from rank body odor and halitosis– while Mike’s a gregarious hedonistic flirt. Both have terrible habits from smoking and drinking too much to Tilda’s propensity to steal. Neil’s a responsible, hard-working attorney and loyal friend. [“Neil’s born to draw people together.”] Rachel’s a quiet, faithful writer. [“When exactly is a good time to say, oh by the way, I hate cooking and most forms of social life?”] Make It Stay is about friendship, love and mortality and everything that those things entail. It’s such an enchanting book that I will return to it just to read random passages.

This entry was posted on March 1, 2012, 20:03 and is filed under Books. You can follow any responses to this entry through RSS 2.0. Both comments and pings are currently closed.