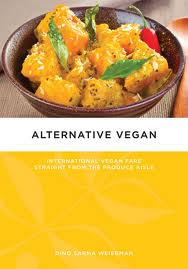 One of my favorite Simpsons scenes finds Marge and Homer at some vegetarian friends home. Chickpeas and something is the answer every time the Indian couple gets asked what’s in a dish. I love chickpeas. I love lentils. And quinoa and kale and tomatoes and cauliflower. In this cookbook, chef Dino Weierman shares recipes for what he calls “international vegan fare.”

He remains chatty throughout and says things such as:

“Veganism is a moral stance. It’s a political statement. At its core, it states unabashedly that the exploitation of animals is wrong.”

“Veganism is not a diet. . . It’s understanding that your “choice” to use animals means that you deny the animals’ choice in their own lives.

I made some Simple Spiced Cauliflower. Curry. Yummy. New way to prep cauliflower.

The potato rounds are super simple too.

Will make the more difficult biryani and try the Quick Chickpea Soup. Usually I don’t follow a recipe to make a salad but often I copy something I ate in a restaurant [the Mediterranean salad from John Harvard’s Brew House or the Waldorf salad from Not Your Average Joe’s for example]. His Palm Hearts salad sounds quite delicious and I intend to make it soon.

This entry was posted on February 21, 2012, 22:44 and is filed under Books, vegan/ vegetarian. You can follow any responses to this entry through RSS 2.0. Both comments and pings are currently closed.