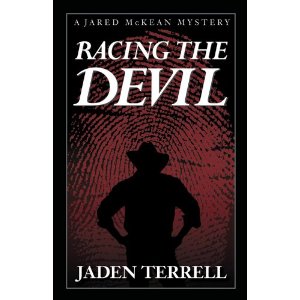 Former police officer Jared McKean currently works as a private investigator in Nashville. What differentiates him from the pack is that he’s sensitive [still loves his ex-wife & she loves him although she’s married someone else], open-minded [he shares a house with his gay friend who has AIDS] and patient [his son has Down’s Syndrome]. That temperament and personality leads him into trouble.

The opening line of Racing the Devil: “Even in the dim light of the bar, I could see the bruises.” This PI’s drawn to dangerous situations. His nature pushes him towards protecting and helping others. Jared finds himself the target of a twisted set-up and he’s racing against the clock to find out who framed him for murder. What is Jared’s connection to the woman? Was someone holding a grudge against him?

I’ve said before that mystery isn’t my genre—meaning that I don’t gravitate toward mysteries or read them all the time– but that I appreciate a real page-turner now and again. This is just that. The observant dialogue, detailed settings and characters will both endear and anger readers. I didn’t realize that Jaden Terrell was a woman until I was well into the story. That then made me contemplate gender influences of writers on story and voice. Racing the Devil is a wonderful read with its vivid portrait of Nashville, plenty of horse scenes and fascinating characters.

purchase at Amazon: Racing the Devil

This entry was posted on January 8, 2012, 15:41 and is filed under Books. You can follow any responses to this entry through RSS 2.0. Both comments and pings are currently closed.