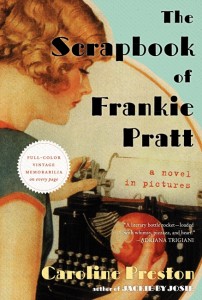 Amy Steele: Why did you want to write a story in the scrapbook format?

Caroline Preston: I like to say the idea of making a scrapbook novel was 40 years in the making. As a little girl, I used to pour over my grandmother’s flapper scrapbook filled with dance cards, letters from old boyfriends, ocean liner tickets, and even long curls snipped when she got her hair bobbed.

My first three novels were what I guess you’d call “conventional” format—i.e. just words. My third novel Gatsby’s Girl was inspired by the meticulous scrapbook F. Scott Fitzgerald kept about his first love, Ginevra King—her first note to him, her handkerchief, and a newspaper clipping about her marriage to another man. Later he would turn the story of his unrequited crush into The Great Gatsby.

When I was casting around for the idea for my fourth novel, I wanted to create something that was as visual and powerful as a scrapbook. And then I had a crazy idea—why not make a novel that WAS a scrapbook. Not a digital scrapbook, but a real one made of real stuff that I cut up with scissors and pasted together with glue.

Amy Steele: What came first—the story or the memorabilia?

Caroline Preston: I started with my character, Frankie Pratt, and the outlines of her story, which was set in the 1920’s. I imagined an 18-year-old girl who wanted to become a writer and her journey which would take her to Vassar, Greenwich Village, and Paris.

Then I hunted down and bought all the things that a girl like Frankie would glue in her scrapbook—postcards, movie tickets, Vassar report cards, menus, sheet music, fashion spreads, popular magazines, a New York subway map, a Paris guidebook, and of course love letters. In all, I collected over 600 pieces of vintage 1920’s ephemera. 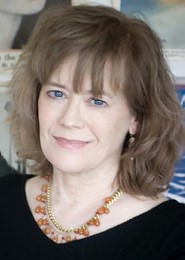 Amy Steele: How did the memorabilia dictate the story?

Caroline Preston: Frankie’s story changed and evolved as I found surprising things—for example an original book cover for The Sun Also Rises. The book caused a huge fuss in Paris when it came out in 1926 because everyone recognized the characters, and she would be right there to bear witness.

Amy Steele: Why did you choose to set Frankie’s story in the 1920s?

Caroline Preston: Like a lot of people, I have a romantic obsession with the 1920’s when very aspect of life (especially for women) was turned upside down and reinvented. Women cut off their hair and hemlines, got the vote, went to work, and felt freed from Victorian behavior codes. Writing Frankie Pratt was a chance for me to indulge in some lovely time travel.

Amy Steele: How would you describe Frankie Pratt? What do you like best about her?

Caroline Preston: When the book opens in 1920, Frankie is an 18-year-old girl living in a remote New Hampshire village. She has ambitions for herself—she wants to go to college and become a writer—and is able to overcome financial hardships to get herself to Vassar. After college, she heads off to Greenwich Village and Paris on her own to follow her dreams. I love her contradictions—gutsy, wildly romantic (which results in a few bad choices), unwilling to take no for an answer, but also a sensible and principled Yankee girl at heart.

Amy Steele: Where did you get a lot of the things featured in the scrapbook?

Caroline Preston: I had a surprising number of 1920’s items in my own collection of vintage paper. I stopped at every roadside antique store and junk shop I passed—from Mississippi, Virginia, New York and Illinois. (My favorite store is Whiting’s Old Paper in Mechanicsville, Va.) And also over 300 items from eBay—so many that my mailman complained.

Amy Steele: What did you like about working as an archivist?

Caroline Preston: As an archivist, I sifted through trunks and boxes of old family papers. It reminded me of hunting through the attic of the house I grew up in.

Amy Steele: How did you transition to writing?

Caroline Preston: I didn’t start writing until I was 40 and had had my third child. I’d worked as an archivist for 15 years, and wanted to turn some of those fabulous stories I’d unearthed into fiction. My husband, the writer Chris Tilghman, encouraged me to give it a try. A year later, I finished my first novel, Jackie by Josie.

This entry was posted on November 13, 2011, 22:35 and is filed under Books, Interview. You can follow any responses to this entry through RSS 2.0. Both comments and pings are currently closed.