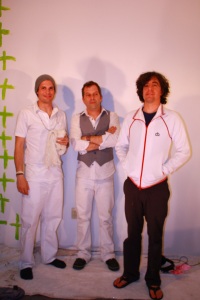 Amy Steele: Thank you for taking the time to answer a few questions.

Brendan Harney: You’re totally welcome. Our pleasure for sure. Nothing like the opportunity to talk ’bout what we love.

Amy Steele: The two of you, Brendan and Scott, have been together as Wheat for 15 years. How did Wheat start?

Brendan Harney: We started off as art school pals – “hangin’ out” in the parking lot of the art building. We always enjoyed each other’s aesthetic choices and such, and looked for ways to collaborate. And, then eventually we decided that we could kinda pull a lot of things together by making music and art under one umbrella sorta thing. No goals – no business plan – just whatever felt right.

Scott Levesque: yeah I had actually never witnessed Bren play a drum, but trusted that he’d be great. We had a lot of the same things in common we loved in music, visual art and artists, some books, etc.

Amy Steele: What kind of music training do you both have?

Scott Levesque: Actually I have anti-training… I seriously have a mental block when it comes to facts and figures; A’s and D’s. …it’s really funny. I just really enjoy the creative process being pure and natural. I just listen up super-ultra-mega close is all. And feel junk so I go with it…

Brendan Harney: Basically none. Really, not much at all. I took drum lessons off a guy for ’bout a year, but that was way way way before I ever started playing with Scott. In fact I had put the drums down for many years while working’ on visual art stuff. My best music training is listening and playing – listening and playing.

Amy Steele: What has changed since the band’s inception?

Brendan Harney: Well a few dudes have come and gone over the years for sure – most notably our original bass player (Kenny Madaras), and our long time guitar player and [honorary] kid brother (Ricky Brennan). And, the roles we play in the band continue to evolve sorta like a strange mismanaged garden. you know – it obviously got a bit more “professional” as the years went by – but, we also always throw some wrench in the works there as well – just to keep things fresh. Also – our aesthetic continues to mutate into something of its own. Who knows where it will go next!

Scott Levesque: I don’t always see change since I’m so close, but we always refer to a focusing, flex and wobble, sort of thing… we tighten up, lax out on the other end. Still the same guys at the core, but we get restless and crave change within the wheat framework [which comes so naturally]

Amy Steele: How do you manage longevity in such a rapidly changing music industry?

Brendan Harney: We just have always put the making of music right at the forefront (sometimes at the cost of a good career move and such like that). And, we’ve always kinda had change happen to us all along the way which keeps us working and guessing and reaching for something. God knows what – but reaching for something. I think something as close to real communication as we can get. It’s elusive, but we always try and share something legitimate – not bullshit – but, you know…… maybe spiritual on the love level or something.

Scott Levesque: You know the simple doing of it makes it so. “The horns don’t move until it walks,” that’s Captain Beefheart btw… it’s funny: if you write new songs, you have new songs. No great mystery. We exist because we say we do.

Scott Levesque: mutual respect for the other ones choices and artistic decisions. Plus I’m amazed at how Bren has always listened to most everything I’ve given him… and then made it better [or worse] in some way, shape or form.

Brendan Harney: I guess we have a lot more in common, taste wise, than not. We have complementary strengths as well. And now, we have Luke Hebert in the band; who plays all kinda instruments and is such a great dude to hang out with, that it keeps it all like a little bedroom beer party or something akin to that. Hanging out – sharing – working on getting it right.

Amy Steele: What has been or is your greatest challenge?

Brendan Harney: good question. Probably keeping our weirdness in check. It wouldn’t be hard for us at all to just make music that is kinda out there and only for us I think. So, the challenge is to remember to shape the music in a way that doesn’t feel too tangential or difficult. We get bored super easy – so, we gotta put songs down before we reinvent the wheel every half hour or so!

Scott Levesque: then also the opposite way… keeping the m.o.r./ pop-ness in check. Relaxing the ultra-pop arrangement side of us… like the tightrope walking thing. I love both sides equally! Black Dice to Kelly Clarkson… it’s all good at certain times. Great music is great music!

Brendan Harney: just that – making music. Taking a song from a simple idea, and/or chord progression, and then get to the point where it is fully realized. That’s a ton of fun. Staying quiet – being still – find out where that song wants to go, ’cause it’s got its own life, but we gotta channel that shit. So, you know – get a little smoke in our eyes – get quiet, and see if we can’t carve that song out proper.

Scott Levesque: yeah the “un-carved block” aspect of music discovery… but also just the demands and rigors of being a song writer. Never being bored, or complacent. Always workin’ out a verse, letting your life imitate art imitate life. Having a “higher purpose” or responsibility to the culture… whether success or not, having a “radiohead” that hopefully never switches off.

Amy Steele: Do you have a favorite album, a favorite song and if so, why?

Brendan Harney: I think my personal favorite Wheat album is, Everyday I Said a Prayer for Kathy and Made a One Square Inch. It has a tremendous spirit to it. When I listen I can feel the room we did it in. I can feel the emotion. I can feel the spirit. It’s a challenging record for sure, but it’s real art. Great concept – great songs – great and crazy execution.

Scott Levesque: yeah lots of improvisation on that [Kathy] record… though I’d say the newer songs are faves of mine… I love the new chapter, the m.o. re-invention and the current challenges of the day, time and place.

Amy Steele: You’ve released some new singles on your website. What’s the plan behind that?

Brendan Harney: Well, we’re working on our 6th full length (Can’t Stop the Addiction), and we just didn’t wanna have this huge gap between the last record and the next in terms of output. So, we figured this would be a cool project to do. Three double a-side singles that have a similar look and feel. Similar spirit hopefully. It’s always good to just finish songs, and not have a bunch of stuff in the “to do” box. This gets us in the zone, and makes us finish things up and get those kids out the door! Once those songs have gotten their legs, and can stand up on their own, it’s – “you go now and have a great life – don’t get yourself into any trouble now!”

Amy Steele: When do you expect to have a complete album finished? Do you record yourself or work with someone?

Brendan Harney: probably next fall or something. Never quite sure ’cause the process becomes its own beast. We might need to visit another planet or something before we get our heads on straight to fight the good fight. We do a bunch of work ourselves, and we also have been working with Citizen Kane as well.

Scott Levesque: we have always done both [ways of recording] we like the “one takes” and unique sounds that come from necessity and haste to remember but also like the wrench and sometimes “Band-Aid” other folks can throw into the mix, so BOTH, always!

This entry was posted on October 22, 2011, 18:38 and is filed under Interview, Music. You can follow any responses to this entry through RSS 2.0. Both comments and pings are currently closed.