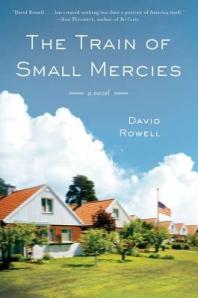 The Train of Small Mercies links several vignettes like cars on a train. It’s rather an ingenious concept. Seemingly disparate individuals become connected through a national tragedy. It’s 1968, a tumultuous time in the United States—the Vietnam War, race riots, assassinations of Martin Luther King, Jr. and then presidential candidate Robert F. Kennedy while on a campaign stop in California. His body traveled by train from New York to Washington, DC for burial at Arlington National Cemetery. Apparently at that time, people lined the route to pay respects or out of curiosity or for many other reasons. Author David Rowell creates stories for a few who thought they needed to be there to witness this event. The reader will discover the whys and hows of: an injured Vietnam War veteran; a fifth grader who wants to see a dead body; a woman who lies to her husband for a chance to witness history; a young porter boarding the Kennedy train in New York; a man and his highly anticipated pool party with his wife and their friends; and a woman who is in D.C. to interview for a nanny position with the Kennedys. The 60s, a fascinating decade, receives exceptional treatment in The Train of Small Mercies.

This entry was posted on October 19, 2011, 23:07 and is filed under Books. You can follow any responses to this entry through RSS 2.0. Both comments and pings are currently closed.