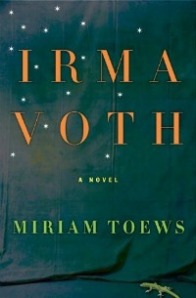 I thought about bringing a cow into the house for company, just one. A small one. Or I could sleep in the barn like Jesus but without the entourage or the pressure to perform. I lay in my bed thinking of ways I could make Jorge happy if he ever came home again.

19-year-old Irma Voth lives a solitary existence within an isolated Mennonite community in Mexico. After she married a Mexican man to her parents’ dismay and fury, she’s basically been cast out on her own. Now her husband Jorge left and Irma doesn’t quite know what she should do. When a well-known filmmaker and his crew arrive to make a narrative film about the Mennonites, curious Irma lands a position as interpreter [she speaks English, Old German and Spanish]. As time goes on we learn about Irma’s abusive father and difficult family life as well as her lack of choices. When her little sister Aggie runs away to Irma and the film crew everything changes. Irma must now look out for her 13-year-old sister. When their father disrupts the film, Irma and Aggie flee with their baby sister [at their mother’s urging] to Mexico City to begin anew.

Miriam Toews writes with splendid style and a sharp, humorous tone. She’s created a strong, independent, clever woman in Irma Voth. It’s both positive and negative that she leaves out information about the Mennonites and their community. It allows for an air of mystery and for Irma to stand out in a unique way. Irma Voth is a memorable, ideal novel about survival, choice and the search for identity.

This entry was posted on September 6, 2011, 06:46 and is filed under Books. You can follow any responses to this entry through RSS 2.0. Both comments and pings are currently closed.