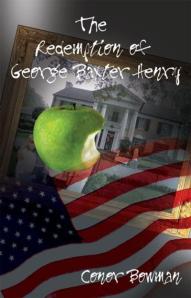 A well-written novel doesn’t always have to have a likable character. George Baxter Henry in The Redemption of George Baxter Henry is one of those guys who’s deceptive, arrogant, selfish, sexist and manipulative. The Henry family travels to France for several months when George’s wife, Muriel, discovers he’s been cheating on her.

People say marriage isn’t all roses, but I’d got further and say it’s mostly bills and parent/teacher meetings with a little pasta and misunderstanding thrown in.

For George, he must remain married to maintain his lucrative law practice (his mother-in-law bought in to the practice and his wife would end up owning a large portion of it if they divorce). The 90-year-old mother-in-law once worked as an actress in that classic bygone film-star era. Teenage daughter Iska leaves her father notes each day containing a fact she’s learned in her research for a book about apples. Older son Billy wants to be a rich and famous musician. He has no plans for college and a major label appears poised to sign his band.

Author Conor Bowman uses first person narrative to tell this fast-paced story. George balances fatherhood, his wife and a new paramour in the South of France in his self-serving, opinionated manner. And why not be when you’re wealthy and can get away with it? Does George find redemption in France? Depends on how you look at it. Bowman spins a bittersweet, amusing, offensive and fast-paced story about one seriously dysfunctional guy and his long-suffering family.

This entry was posted on August 17, 2011, 13:54 and is filed under Books. You can follow any responses to this entry through RSS 2.0. Both comments and pings are currently closed.