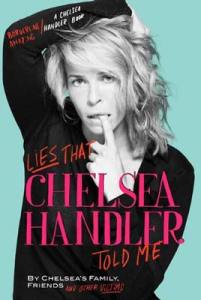 “If Chelsea takes the time and energy out of her insanely hectic life and goes to extraordinary lengths to screw yours up royally, leaving you utterly humiliated and degraded, then you’ll know you’re good to go. She clearly loves you.”
–Brad Wollack

The takeaway from Lies that Chelsea Handler Told Me: Chelsea’s a prankster and a loyal friend. I’m a fan of Chelsea Handler the comedienne and talk show host but haven’t particularly enjoyed her books. They’re not as clever and witty as I expected. My Horizontal Life is a good, light read but I anticipated more and the same with her others—Are you there Vodka? It’s Me Chelsea and Chelsea Chelsea Bang Bang [that one I thought was the worst]. This time around, Chelsea decided to let her friends, family and staff write about her and her penchant for telling lies and playing elaborate jokes on people. This allows the reader to know some more intimate details about Chelsea’s supportive nature: she’s worked with many of the same people for years; she takes group vacations to Cabo and the Bahamas; and she bought a spacious house so her brother Roy and other friends could move in or visit.

Roy moved to L.A. at Chelsea’s urging to cater for the show and ended up doing bits on-air and traveling with Chelsea during her stand-up tours. “People on the street were recognizing me, I was a burgeoning television star, and I was flying around the country in private jets. I felt like a Rolling Stone, only I couldn’t sing and I was thirty-five thousand dollars in debt. Chelsea eventually paid that off, but not before she took away all my credit cards and told me I should be ashamed of myself.” What a kind sibling. Her friend Stephanie writes: “Contrary to what people might think, as much as Chelsea loves fucking with people, she has a big heart, one that prevents her from wanting to ever truly hurt someone’s feelings.”

Chelsea Lately show producer Johnny Kansas [whom Chelsea calls “the bird”] writes that Chelsea hid two turkey meatballs in the backseat pockets of his new Cadillac. Chelsea’s diet consists of a lot of turkey meatballs, humus and arugula. During his honeymoon, Chelsea really nailed writer Brad Wallack by convincing him that TIME planned to visit the show to do a photo-shoot with the writers. Brad felt he’d worked hard and deserved the credit but he’d have to cut his honeymoon short to return to New York. He went as far as spending an exorbitant fee to change the tickets before he found out that it was a prank. Chelsea told staffer Heather McDonald she was pregnant and Heather obsessed over it for nearly a week. Roundtable regular and stand-up comedian Josh Wolf got duped into thinking his wife owed $5000 to bookies for a gambling debt.

“If Chelsea doesn’t fuck with you, she doesn’t care. And it’s easy to see why I keep coming back for more. She’s spontaneous and compassionate. She favors individuality. She roots for the underdog, and her loyalty never wavers, not even for the sake of a joke. She is truly a friend.”
–Amber Mazzola

This entry was posted on June 1, 2011, 16:54 and is filed under Books. You can follow any responses to this entry through RSS 2.0. Both comments and pings are currently closed.