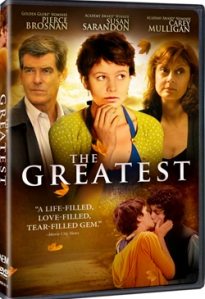 If it’s his, I’m not going to be happy about it. I don’t want people to think we’re blessed.

The Greatest effectively and touchingly explores denial, anger and fear through the father, mother and younger brother of a deceased teenager [Aaron Johnson] when his pregnant 18-year-old paramour Rose [Carey Mulligan] shows up at their home. Rose and Bennett Brewer, seemingly opposites, admired each other from afar until the final day of school. Surprise. The Barnard-bound Rose finds herself pregnant from their one time together. She’s intelligent enough to earn entry into the Seven Sisters school but not savvy enough to avoid an unplanned pregnancy. The teens loved each other as much as teenagers can. The Brewer family must come together to understand both the loss of their son and the addition of their son’s child. At times it feels redundant and very Ordinary People decades later but with Susan Sarandon and Pierce Brosnan it works for the most part.

purchase at Amazon: The Greatest

This entry was posted on April 16, 2011, 22:59 and is filed under DVD. You can follow any responses to this entry through RSS 2.0. Both comments and pings are currently closed.