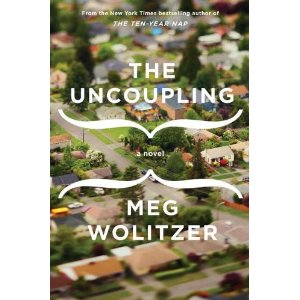 Unlike a Greek tragedy that ends in grand bloodiness or a Greek comedy that ends in triumph, The Uncoupling sputters and disappoints. The story is about a town that falls under a spell when the new drama teacher chooses to put on the Aristophanes play Lysistrata, where women stop having sex with men to end a long, drawn out war. Suddenly, the women in the town start to feel less attracted to their lovers, spouses, boyfriends.

. . .although this is an ancient Greek play, it’s also a strong and hard-hitting and comedic but dead serious piece of art. Some people think of Lysistrata as an important feminist text; other people think it basically mocks women and doesn’t take them seriously as potential agents of change.

Who is this new woman Fran, who’s mysteriously stirring up trouble in this quiet New Jersey suburb? It’s a relatively clever concept but it wasn’t taken far enough by author Meg Wolitzer. Clever would be men losing interest in sex but I suppose there are not Greek tragedies about that because the Greek men didn’t give up sex.

Her lack of desire seemed neither on purpose nor by accident. The word “lack” was too passive for what was happening; something compelled her, though she was ignorant of what it was. Not wanting to sleep with him was a reverse drive, and he seemed to recognize this, and was hurt and angry.

As an English major at Simmons College, I took a Greek mythology class and don’t recall this particular comedy. I didn’t actually find the idea of Lysistrata or The Uncoupling remotely funny. I thought it sad. Wolitzer describes anyone over 40 in such a disheartening, aged manner. As if by 40, women aren’t interested in sex anymore really and most 40-somethings are settled into a routine lifestyle. Those who are interested in sex or have a satisfying sex life, such as the popular teaching couple of Dory and Robby Lang, prove to be the anomaly.

As a feminist, I want women to change the world. I work on political campaigns. I bring notice to worthwhile causes. I vote. I don’t condone women using their sexually for change. It’s too expected. Too easy maybe. I don’t know but it just didn’t sit well with me throughout The Uncoupling. The further I read, the more annoyed with the entire story and every character in it I became.

This entry was posted on March 31, 2011, 20:54 and is filed under Books. You can follow any responses to this entry through RSS 2.0. Both comments and pings are currently closed.