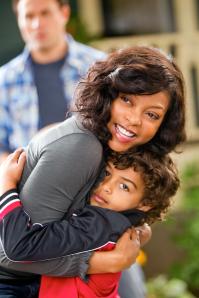 Do you know how many children I have? Just one. I’m not going to be patient.
–Tiffany Rubin [Taraji P. Henson]

Based on a true story, Taken from Me: The Tiffany Rubin Story reveals the risky plan that school teacher and mother Tiffany Rubin [Academy Award® -nominee Tarji P. Henson] took to rescue her son Kobe [Drew Davis] after the boy’s father abducts him and takes him to South Korea. Tifanny agrees to let her ex-boyfriend take Kobe for the weekend to Disneyworld. She buys Kobe a cell phone and worries about letting him go but realizes she cannot keep her son away from his father. Days later, she hasn’t heard anything from Kobe and finds herself in a nightmare scenario. After exhausting every conceivable path imaginable, Tiffany turns to Mark Miller [Emmy Award®-winner Terry O’Quinn] and his charitable organization The American Association for Lost Children. As a teacher, Tiffany accesses a teaching-exchange web site in South Korea and locates her son. From there, she and Mark come up with a plan to travel to South Korea and bring home Kobe. They have a limited window of opportunity to get Kobe from his school to the U.S. Embassy where as U.S. citizens they are safe from any prosecution by South Korea. The daunting aspect is that if Kobe’s father finds out what’s happening and reports Tiffany and Mark to the authorities, they’d end up being prosecuted. As Tiffany, Henson convincingly elicits fear, frustration and anger at her devastating situation. Viewers know that Tiffany will succeed or the story wouldn’t be a Lifetime movie. It’s well-done and has enough intrigue to keep us engaged.

Taken from Me: The Tiffany Rubin Story premieres on Lifetime on Monday, January 31 at 9pm [ET/PT]

This entry was posted on January 30, 2011, 16:53 and is filed under TV. You can follow any responses to this entry through RSS 2.0. Both comments and pings are currently closed.