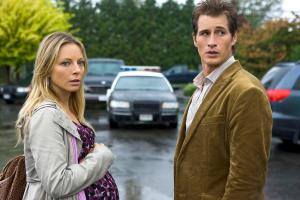 Ivy [Anastasia Griffith] has disturbing nightmares about losing her baby and insists on wearing an amulet. She doesn’t want to name the baby yet. She and her husband David [Brendan Fehr] have had several unsuccessful attempts to have a child and now Ivy is pregnant again and almost full term. They’ve recently moved into a new house. On child proofing, a friend provides a foreboding remark: “all those stairs and a landing and a dumbwaiter?” The couple decides to have a yard sale because the previous owners left behind quite a few possessions. A relatively forgettable and odd high school classmate Melinda [Clea DuVall], also pregnant, shows up at the yard sale. She clearly likes David. A few days later, Melinda is missing and various clues [such as a knife with fetal tissue and blood] point toward David as the culpable party. Ivy begins to doubt her husband who of course assures her that he’s innocent. Does David, who Ivy’s known since high school, have some bizarre secret? Did David and his jock friends do something awful to Melinda in high school. Did David have an affair with Melinda? Through her own perseverance, Ivy suspects that Melinda may have many secrets, an over-imaginative recall of high school and a misplaced crush on her husband David. As Ivy, Griffith veers from paranoid wife to private investigator with ample credibility. She quickly transforms the neurotic character into an impassioned one. And Baby Will Fall is another satisfyingly eerie Lifetime movie even if its focus on a spurned woman veers toward cliche.

One thing I’ve noticed that most Lifetime movies revolve around people who knew each other in high school, remained friends, married each other and all still live in the same town now raising families. It’s peculiar and not very realistic.

This entry was posted on January 22, 2011, 14:31 and is filed under TV. You can follow any responses to this entry through RSS 2.0. Both comments and pings are currently closed.