Twitter has been an abundant source for discovering new artists—particularly those in music and literature. Recently I “met” Leigh Maree, a talented and memorable singer/ songwriter. Her pop-folk style combines diverse vocals with intriguing arrangements and a combination of lightness and darkness. The music bursts with heartfelt, thoughtful lyrics to which should comfort many listeners. Not only is Leigh a musician but she’s also a poet and artist. I recently interviewed her via email.

Amy: You grew up in Australia and Canada? What was that like? How did going back and forth between two countries influence your art?

Leigh: I’d say that it made me feel quite different from others. It was actually really hard in elementary school. Kids could be quite mean. Always making fun of how I talked; and after being in one country long enough to pick up the accent I would go back and have a foreign accent again. So I was always the foreigner. I think it affected my art by making me focus more on it as I had become so introverted. Of course once I become a teenager then it was a novelty. So then there was this aspect of being the special one as opposed to be the alienated one! I think being exposed to both countries has given me more varied musical influences as well. Great musicians have come from both countries so I’ve been lucky to have been exposed to both.

Amy: Some songs—“Scrapyard Truck”— have the tough gnarl of Courtney Love & others are much more contemporary pop like “Crying Jag”. You have a great vocal range and lovely voice. What kind of voice training have you had?

Leigh: Interesting yeah there’s a story behind that one! When I was 13 I studied with a classical voice teacher who was an opera singer. My voice has always been very much soprano and we really focused on that. I really didn’t have a lower range, which I found quite frustrating when I later attempted to sing rock songs influenced by Kurt Cobain. So I really had to develop it. I think I wanted to sing in “not so nice” a way. “Scrapyard Truck” was recorded earlier in 2005 when I was still more influenced by grunge rock. “Crying Jag” was recorded in 2009 after I had studied with a vocal coach that taught me how to sing Jazz. My producer for Crying Jag also influenced me to drop the snarlyness!

Amy: In the bio on your site it says that you were influenced by Kurt Cobain and Radiohead to pick up a guitar and play music. What is it about those two different artists that motivated you to try to write music yourself?

Leigh: I think I really connected with their real perspectives on life and also with being kind of an outcast – which I’ve always felt a little left out of regular life. I loved their sad expression of reality. It made me feel better to listen to their songs, as I didn’t feel so alone with my own feelings. I think I wanted to do the same for others and promote more real feelings about life instead of candy coated fake ones. 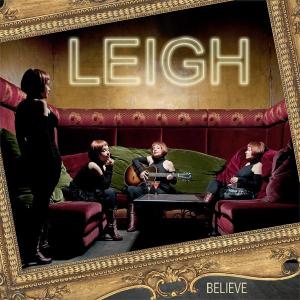 Amy: What inspires you to write a song?

Leigh: Emotions definitely inspire me. A strong feeling that I’m having about someone or something. Usually it’s a way to help myself understand how I’m feeling about it/them. Then the writing and singing aspect becomes a catharsis for me.

Amy: Where is your favorite place to write a song?

Leigh: It’s wherever I am when the emotion or words come to me. But usually the groundwork is done at home.

Amy: How is a live performance different from what someone hears on the recorded music?

Leigh: There is a big difference for my music anyway cause there are allot of layers of instruments in my recordings which makes it hard for me to replicate it live. The song is still there live but is also is coming from a point where I’ve changed my vocals styles from when it was recorded for example Scrapyard Truck – where now when I sing it live I’m not singing in the exact same way. But I might though. There’s always a possibility of the live performance not sounding like the recording.

Amy: What are the similarities and differences between writing poetry and writing music?

Leigh: I find it very similar except with a song you have to make it work with the rhythm and tones. I find song lyrics always end of being simplified compared to a poem. There can be repeats of the same simple phrase that just wouldn’t be interesting in a poem. Cause with a poem all you have is words to make it interesting. You can add all types of tones and rhythms to the same sentence to make a song more interesting. I think in both songs and poems you always have to watch out for clichés. That’s very important.

Amy: How do define a good song?

Leigh: A good song is one that is original – not sounding like any other song. So many songs are just well done re-arrangements of something already done. Its rhythm and pitch need to be spot on also. It needs to really take you somewhere in the feeling and image department, to affect you profoundly. And to surprise you as well with something you might not be expecting. It also has to make sense like a story or poem should.

Amy: The music industry has changed in so many ways—what’s the best part and most challenging aspect?

Leigh: The best part now is that the Internet itself can expose your music. Before that you would have to rely on a record label to expose you by choosing you and enabling you to be played on the radio or TV music station. Now there are so many niche online radio stations that give artists much more of a chance of being heard as well. So now you don’t have to be chosen by a record label to be heard anymore. The challenging aspect is that people aren’t paying for music as much anymore which makes it hard for an artist to make a living at it. But at least it can be heard.

Leigh’s new album, BELIEVE, is out now at bandcamp.

This entry was posted on December 13, 2010, 21:39 and is filed under Music. You can follow any responses to this entry through RSS 2.0. Both comments and pings are currently closed.