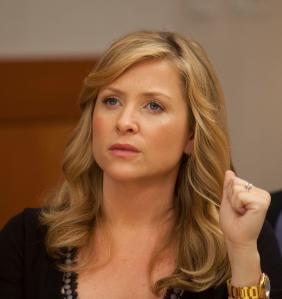 Despite the limited access to special affects and feature-film quality editing, Lifetime Movie Network movies have gotten much better. Lifetime has always attracted name actresses and actors but usually not in the midst of their popularity. That’s changed and the scripts and stories are stronger.

One Angry Juror stars Jessica Capshaw [Grey’s Anatomy] as corporate litigator Sarah Walsh. Instead of getting off because most wouldn’t want an attorney on jury duty, Walsh finds herself sitting on the jury for a murder trial in Chicago. At first Walsh makes the assumptions of many others that the defendant is a throwaway, a delinquent. When she starts to truly listen to the prosecution’s arguments she realizes that it may be a set-up and realizes that the young man, Curtis [Jonathan Scarfe] could be not guilty. She stands strong and the case gets thrown out as a mistrial.

Walsh joins defense attorney Donald Burston [Cold Case’s Jeremy Ratchford] and private investigator Derrick White [Michael Jai White] to prove Curtis’s innocence. Through investigation and perseverance, Walsh and White uncover layers of corruption throughout the police department and D.A.’s office just proving that Chicago is a really corrupt city, as Walsh states at one point. As Walsh, Capshaw is strong and intense and the viewers root for her to discover the truth. She’s a hard-working attorney with a private law office and makes tons of money but through this case, she realizes that as an attorney she may gain much more by helping people. It doesn’t pack the punch of Conviction but for a TV movie, One Angry Juror proves to be thoughtful in that Lifetime sort of way.

This entry was posted on November 14, 2010, 23:15 and is filed under TV. You can follow any responses to this entry through RSS 2.0. Both comments and pings are currently closed.