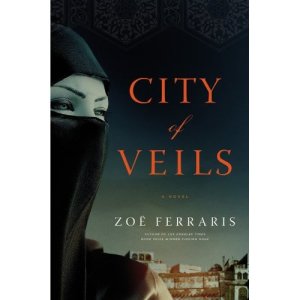 Zoe Ferraris earned her MFA in Fiction from Columbia University in 2006. After the first Gulf War, Ferraris lived in Jeddah, Saudi Arabia with her then-husband and his family, a group a Saudi-Palestinians. She has a daughter and lives in San Francisco. In her second novel, City of Veils, she deftly weaves together an intricate tale of individual struggles with antiquated customs. Ferraris illuminates the varying levels of religious devotion and the status of women in Saudi Arabia from several viewpoints.

Amy Steele [AS]: Where did the idea for this story come from? 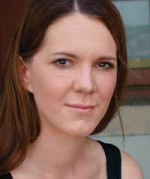 Zoe Ferraris [ZF]: City of Veils is a follow-up to my first novel, Finding Nouf. I wrote Veils because I really felt that there was more to say about Saudi Arabia and that my characters have further to go. In particular, I wanted to give a wider perspective of Jeddah. It’s a fantastically diverse and complex place. Two books won’t do it justice.

AS: What kind of research did you do about women’s rights and the treatment of women in Saudi Arabia?

ZF: A lot of it came from first-hand experience, but obviously I haven’t lived through everything, so I did a lot of reading. These days my primary interest is in talking to people who live there and hearing what things are really like on the ground. No matter what the media says, no matter what the “official” law is, when somebody lives through something, it’s always going to be more real.

AS: How did living in Saudi Arabia influence your writing about the culture?

ZF: I went there with the notion that women were catastrophically oppressed by evil male tyrants, but living there I realized that men suffer from gender segregation, too. In some ways I felt more sorry for them. My ex-husband spent a very long day at work and would come home to me and his sisters, who’d beg him to take us out, take us ANYWHERE, we’ve been stuck HOME all day. No, we haven’t cooked dinner. YOU have to take us to the grocery store. And the drug store. And so-and-so has to go to the doctor…. I started feeling sorry for the evil male tyrant.

AS: What do you think that the people of Saudi Arabia think of Americans? The Saudi Arabian government is such an ally and yet we look away from the mistreatment of women.

ZF: It’s tricky to generalize what a whole nation thinks, but I’ll say this: I usually come away from the Middle East thinking that people seem to love and hate America in equal measure. On one hand, it’s the Big Bad Evil Empire that goes to war for oil and sides with Israel against the poor Palestinians. Mostly, we’re convenient targets for rage — most of it misplaced, in my opinion. On the other hand, who can resist a country that invented the internet, cell phones, and Pamela Anderson?

One of things that comes out in City of Veils is just how integral the behavior of women is to national, religious and political identity. And that’s not really something we should be interfering with. I hope we stay hands-off with the Saudi government because we know it’s not our job to “fix” the way they think. It’s our job to recognize that we don’t agree (perhaps) with their policies, but until a bunch of Saudi women come asking us for help, we leave it alone. I say good call, American government. Let the Saudis fix the Saudis.

AS: What do you like best and least about Saudi Arabia?

ZF:
Best: the hospitality. People are so generous with their time and energy.
Worst: realizing that it’s so frickin hot that I wouldn’t leave the house even if I could.

AS: Who is your favorite character in City of Veils and why?

ZF: Nayir is still the best. It’s like he’s my favorite son and I’m trying to hide it from the others but they all know anyway and figure he deserves it because he’s had such hard luck.

AS: Why did you involve Westerners, Eric, Miriam and Mabus in City of Veils and why do you think some Westerners are attracted to the Mid East culture and Islam?

ZF: I really wanted to include an outsider’s perspective because there are so many non-Saudis living in Saudi Arabia. I’ve also known a lot of Americans who’ve lived in Jeddah.

Who knows why anyone gets interested in something? I was drawn to Saudi Arabia when I met my ex-husband. There could be a hundred personal reasons I found the place so enigmatic and confusing and wonderful, but essentially, love drew me in.

AS: Do you think that what Middle Easterners believe about Americans is what they have culled from television and film?

ZF: This is such a scary thought. I mean, shut your eyes and let a random episode of Temptation Island pop into your head. And try not to imagine a bunch of Muslim teenagers sitting around their illegal satellite TV in Jeddah thinking that all Americans run around in bikinis having sex with their neighbors. Or that we’re all super rich vapid housewives. Or heck, that we can all dance and sing. Our national storytelling lurches so happily into the freak-show factor, I kind of want to say that we deserve what we get.

AS: Did you base Katya on any women you met in Saudi Arabia?

ZF: In a way, she was inspired by a few women I met there who were highly educated and who were working outside the home as well as raising families. I was really interested in these women except that the ones I seemed to meet were often extremely devout. I started getting the idea that maybe they cloaked themselves in devoutness to protect themselves from criticism. So a woman works outside the home, and has a successful career, but no one is going to say she’s a bad Muslim, because every time you talk to her, she’s so intense that you get scared for your mortal soul. I really wanted Katya to be more moderate. I eventually started meeting more moderate-thinking women, and I’d say they’re the majority.

AS: The prostitution and taking of “summer wives/ temporary wives” in Saudi Arabia is so strange and layered. How did you find out about it?

ZF: I see this as a close relative of the “misyar” marriage, which is essentially a marriage where the man has no financial responsibility to his wife. Both parties sign a fake marriage document, in case the religious police stop them in public. In other words, quick and easy. Or as an Arab friend of mine jokes: “Muslim dating.” There’s no real commitment in either “summer weddings” or “misyar” marriages. But because society is so strict about couples being married, then the couple has to come up with a fake or temporary marriage license.

A good friend of mine in Saudi first told me about these kinds of situations back in the early 90s. He used to buy his marriage licenses with a row of condoms stapled to the top. As I started researching “summer weddings” for City of Veils, I realized there’s a whole niche industry going on, what essentially amounts to legal prostitution.

AS: UAE is going to crack down on Bluetooth/ smart phone usage. How will this affect those in Saudi Arabia?

ZF: Jeez, if an open place like the UAE is cracking down, I can’t imagine the Saudis will be far behind. Bluetooth is really challenging in a country where women are supposed to stay hidden or modestly covered. It’s kind of the new revolution in flirting. And dating. And generally communicating with the opposite sex. A crack-down would be depressing news.

AS: Why did you want to write a thriller?

ZF: In Finding Nouf, the mystery aspect grew out of a need: I wanted Nayir, a devout Muslim and generally earnest guy, to be put into a situation where he would have to cross the gender segregation lines. The situation would have to be important enough to make him do it, and I figured murder was one of the only things that fit the bill for him. A woman dies and nobody seems to think it’s odd. But he does, so he has a higher moral cause to go prying into a woman’s life.

This subject still interests me in City of Veils. A woman dies, and it’s difficult and tricky to find out how she lived her life. Even as a legitimate police investigator, you still have to cross segregation lines, you still have to break down barriers of courtesy and privacy that seem a lot higher in Saudi than they are in other places.

AS: How does your novel compare to your own experience living in Saudi Arabia?

ZF: When I lived in Saudi, I felt like every time I turned around, something humorous or goofy was happening. We’d go have a picnic at a disused runway at the airport (it offered privacy and trees) but the guards would catch us. They would wait until we were settled before turning on the sprinklers to chase us all out. Or during a wedding one day, the doorbell rang and we opened it to find my four-year-old niece, who had run away and managed to make it halfway across town before some old baker noticed her and brought her into his store. She wouldn’t tell him where she lived, so he had to ply her with cookies. The baker was standing at our door, looking completely frazzled. Her stubbornness had worn him out.

I’d love to convey some of that lightness in my writing. It pops up now and then, but as an overall theme it doesn’t seem right in the context of murder.

Buy at Amazon:
City of Veils: A Novel

This entry was posted on August 20, 2010, 13:38 and is filed under Books, Interview. You can follow any responses to this entry through RSS 2.0. Both comments and pings are currently closed.