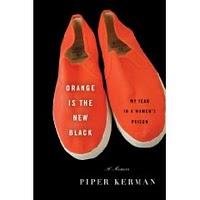 While Piper Kerman and I both grew up in WASPy middle-class environment in Massachusetts and graduated from women’s colleges in the early 90s, I drove across the United States with a friend visiting San Diego, Canyon and Denver while Piper hung out in Bali with drug runners and carried drug money to Brussels.

“I think I was definitely looking for trouble,” Piper explains to me. “I grew up with a certain set of expectations and I wanted to cross those boundaries. My point of view is that there’s an age in your teen and early twenties where people are naturally risk tolerant and really interested in risks. Young people will take the risks that are in front of them, whether a positive risk or a negative risk. It’s unusual that an ordinary middle-class girl would have a risk like this cross her path.”

A decade later, Piper’s criminal past, which she had long left behind, caught up with her. The blonde-haired, blue-eyed, well-educated Piper found herself in lock-up for a felony, sentenced to 14 months in the women’s correctional facility in Danbury, Conn.

“I think you just draw on surprising reserves. You know the analogy that people will respond with superhuman strength that they didn’t know they had in cases of emergency? I think that’s really true emotionally as well. The fears I had were not necessarily met or there were things I was afraid of that turned out very differently than I expected. If you can not just be wrapped up in your fear but observe the world that’s going to ultimately help you.”

Piper chronicles it all in Orange is the New Black: My Year in a Women’s Prison, a candid and reflective memoir. She details earning various privileges like using the phone and procuring special items from the commissary. Piper slowly makes a close posse of friends on the inside. She reads a ton and has so many books that she lends them out to various inmates. Piper received tons of mail and wrote often to her friends and family.

“Letters and the written word become of staggering importance. The correspondence was invaluable in keeping the ties to the outside world.”

To avoid stress, Piper ran on an outside track six miles a day and longer on the weekends.

Orange is the New Black includes Piper’s opinions about unfair treatment, lack of rehabilitation and repeated frustrations within the U.S. prison system.

“Most people in prison don’t even have a high school diploma. The people we put in prison in this country are generally poor people and there’s nothing that’s happening in prison that’s making an apparent and clear path to change. The re-entry and other programs at Danbury was negligible. People that have served long sentences are not well-prepared to come home. The simplest thing is to send fewer people to prison in the first people. For people who are already in prison, I think there has to be serious attention paid to education and realistic skill preparedness for coming home. The most difficult thing for people coming home is employment and I think it’s possible to create connections.”

Orange is the New Black is at turns daunting, authentic, provocative and spellbinding. The best part is that it’s about women from all different backgrounds bonding to endure a miserable situation.

“It changed me physically and it changed me emotionally in ways that were very surprising. I think I went into the experience with a great deal of fear of other prisoners and the thing that you learn is that if you look at other people’s humanity and you recognize your own humanity.”

This entry was posted on May 10, 2010, 22:20 and is filed under Books, Interview. You can follow any responses to this entry through RSS 2.0. Both comments and pings are currently closed.