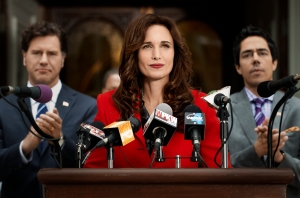 The Front might be the best Lifetime TV movie I’ve seen. It’s far from overly sentimental or melodramatic. True to Paticia Cornwell’s mysteries there are twists and turns aplenty. Arrogant and determined to the point of doing anything to advance her career, Monique Lamont [Andie MacDowell—a diva in her own right—I interviewed her at the Four Seasons in Boston years ago] insists on opening a cold case from 1962 which may or may not be the work of the notorious Boston Strangler. She’ll stop at little for her own career including making a tape of herself undressing in a public bathroom—PG or even G rated of course. She’s also having an affair with a disturbing, calculated student/writer for the Harvard Crimson. 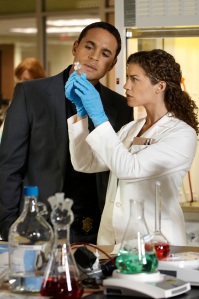 State Police Detective Win Garano [Rescue Me’s Daniel Sunjata] gets put on the case. He’s paired up with Watertown detective Stump [Ashley Williams]. The two start off the case bickering but soon enough work together to solve the case. Sunjata, who holds a masters in Fine Arts from NYU, steals the film as the hard-working, laid back state detective. On Rescue Me he plays a cocky, womanizing firefighter. In The Front he’s all heart, fortitude and warmth. Aside from the “shots” of Watertown, The Front proves to be an intriguing, well-acted film.

This entry was posted on April 15, 2010, 12:20 and is filed under TV. You can follow any responses to this entry through RSS 2.0. Both comments and pings are currently closed.