Author of the sardonic essay collection [based on The Cassandra Chronicles she penned for the London Sunday Times Magazine] It Could Be Worse, You Could Be Me, Ariel Leve sugarcoats nothing as she discusses dating, career, Londoners, New Yorkers, getting older, parties and other distractions that abound as you interact in society. Ariel is like a darker, female Seinfeld– highly observant and realistic. She writes about everything you’ve been thinking.

Ariel resides in both New York and London. She writes for the London Sunday Times Magazine where she has been on contract since 2003. She currently has a column in The Observer Food Monthly called The Fussy Eater. Her work has also been published in the Guardian, Vogue, the New York Observer, Marie Claire, Granta.com as well as other publications. Ariel has been shortlisted for the British Press Awards three times for Interviewer of the Year [2005 and 2010] and for Feature Writer of the Year [2008]. In 2008 she won Feature Writer of the Year from the Magazine Design and Journalism Awards. 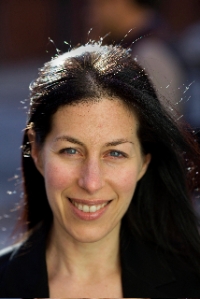 I made the mistake of calling Ariel from a busy Panera. I’m classy like that. And the consummate professional. It was very loud and not at all conducive to an interview/ discussion. I also immediately launched into some lecherous fangirl action and admonished her for not following me on Twitter. It was a complete reversion to high school. Rather pathetic. Maybe Ariel appreciates pathetic journalists. I gushed that I loved the book and felt that we could be sisters because I felt the same way about many things she wrote about in It Could Be Worse, You Could Be Me.

Amy Steele [AS]: How did you get into writing?

Ariel Leve [AL]: I can’t remember ever not writing. Later in my life I really started my writing career when I got into journalism. It opened up another world for me. I wrote a novel, a play, a script. All sorts of things. Then I started in England as a journalist writing for the London Sunday Times Magazine. I started doing features and interviews. I basically had this career open up to me in England. I won some awards for it and then I had this column.

The work I do is pretty diverse. I wrote this column in my voice. I was writing investigative features for the Sunday Times Magazine and then at the same time, I was also writing a first person column on my observational take on the world. Writing is very rewarding when it works but there are a lot of ups and downs. There’s also a lot of rejection.

AS: The columns appeared in England, so there’s a different attitude about what you were writing. Do you prefer living in New York or London?

AL: New York is very familiar. I have friends here and I grew up here. Irony and my sense of humor seem to go over well in England.

AS: I find in Boston that people misinterpret things I say even though Bostonians are supposed to be sarcastic. I’m very sarcastic. Especially on email.

AL: That’s one of the biggest peeves in my life. Having to explain myself.

AS: So how did you anticipate how Americans would react to this collection?

AL: I’m a hopeful person in my view of the world. The stuff that is darker should make people feel less alone. The whole point of it is that it could be worse. That’s how I get through life, I can laugh at myself. I don’t take myself seriously. I really don’t.

AS: I dated a British guy and I found him kind of cold to date. What kind of differences do you find in friends in Britain and in New York or in dating guys?

AS: Once you hit 35, people start to ask, “Why are you still single?” Or “do you plan to have children?” All women are expected to want children or to want to get married.
Why do you think people are so uncomfortable with women being single?

AL: I try to just worry about myself. Personally, I don’t really care what other people think. I don’t really walk around complaining that I’m not a mother. I complain about a lot of things but not about that. Sometimes people make you feel bad that you don’t have a photo to show them of your child and I don’t like to feel bad. In all of the columns I write there’s some sort of emotional authenticity but I use my imagination too.

AS: How to you manage to avoid the negativity getting you down—not that all the columns are completely negative?

AL:I think it’s important to laugh at things. If you take things so seriously that you can’t laugh at yourself, you’re really in trouble. I don’t think there’s anything I can’t laugh at. I’m always the first one to laugh at myself.

AL: Everyone has their limit and it’s just navigating what you can get away with. When I alienate someone I say, “Okay, that’s too much.” That’s my barometer. But generally I like to write about things that other people find irritating as well because then we can have a mutual connection.

AS: So what makes you happy?

Buy at Amazon: It Could Be Worse, You Could Be Me

Ariel Leve, It Could Be Worse You Could Be Me

This entry was posted on April 10, 2010, 18:34 and is filed under Books, Interview. You can follow any responses to this entry through RSS 2.0. Both comments and pings are currently closed.