book review: This Is Not The Story You Think It Is 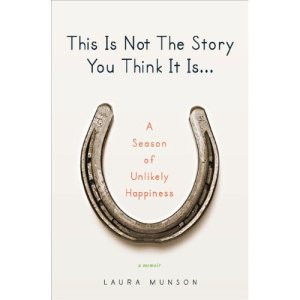 But I don’t buy it. The part about him not loving me. As much as it’s devastating to hear, I believe there’s more to the story, I believe he’s in a state of personal crisis. I believe this is about him.

I neither read the New York Times’s Modern Love column, nor believe in love. At age forty, I’ve never really had it and don’t think I’ll ever find it. Laura Munson turned her column into this memoir This Is Not The Story You Think It Is. Her husband of fifteen years [they’ve been together for 20] says to her one day that he no longer loves her and she refuses to believe or accept it.

But here’s the most painful part—the conundrum that shows me my husband’s inner war and challenges my commitment to non-suffering to the core. His final words before he left for the dump were: “I just want a woman who doesn’t have any baggage.”

Here’s where I land and it’s not graceful: my husband, the father of my children, thinks there’s someone out there who is better for him than I am. Somebody who’s gotten this far in life unscathed. That he then, in effect, believes in fairy tales. And fairy-tale princesses. And maybe even fairy-tale princes, too. (Even though he’s terrified by horses.) But this sort of thinking cuts, and I put on the brakes. I even laugh, trying to imagine a human being without “baggage.”

Her therapist tells her: “So let me get this straight. You base your personal happiness on things entirely outside your control.” That one really hits home. You cannot make someone love you or even like you. It’s one of the most difficult concepts to come to terms with but it rings so true. A harsh reality but true. Laura tries to surrender herself to this idea. She holds her tongue often when her husband does something she doesn’t like [staying out all night, going fishing instead of to his son’s game, avoiding family dinners] or something he says. It’s really admirable as it is so challenging to do. She wants to shout, she wants to defend herself and she wants to point out her husband’s issues and the problem with what he has said to her. But she refrains.

Laura gives her husband the space he needs. Though I suppose because they have two children and their finances aren’t in the greatest shape, he never actually moves out of the house and they sometimes still share a bed. I don’t know how much “space” that’s really giving someone. Finding solace riding her horse alone or with friends, spending time with her children and writing, Laura tries to take her mind off her husband’s state of mind and declaration. She even spends a month in Italy [where she spent her junior year of college] with her 12-year-old daughter. She never begs or pleads with her husband. She remains calm.

There’s much to like about This Is Not The Story You Think It Is: how to cope with a difficult time, be patient with a loved one while that person figures things out and also how to take care of oneself when in crisis mode. I found some solace in Laura’s story and I could relate despite not believing I’ll ever find love that isn’t unrequited. One thing I could not relate to is that Laura quite often speaks of this devilish alter-ego called “Sheila.” This little being in her head or on her shoulder, “Sheila” would fight with Laura about her husband’s attitude and treatment of her.

I want him to have time alone. I cherish my own. We’ve always given each other that room in Rilke’s “greatest possible trust.” Still, regardless of his personal crisis, regardless if he’s telling himself he doesn’t love me anymore, is he willing to ruin the years of trust we’ve built?

In reading This Is Not The Story You Think It Is, I often thought of my own situation with an ex-friend. We dated for the first two years and then we were friends for eight. Brian Schofer started dating a woman [after not dating at all since we broke up eight years ago] and cut off all contact with me. All contact. He has stopped answering my emails, texts and phone calls. He cut me off cold after caring about me and spending a lot of time with me for an entire decade. I dated some men but had time for our friendship. He once told me he’d never let me go and never let anything happen to me, but he did.

Laura reads a plethora of self-help books and spiritual guides [and I admit I own more than a few of these books] from the Bhagavad-Gita to The Book of Love by Rumi to Eckhart Tolle’s The Power of Now and A New Earth to Codependent No More: How to Stop Controlling Others and Start Caring for Yourself by Melody Beattie. In all her reading, one thing she finds is that “the end of suffering happens with the end of wanting. The end of wanting.” That’s a complicated and really difficult thing. How can you stop wanting? Love, happiness, professional fulfillment, good health, devoted friends. How is that even possible?

Is that what this is about? He’s vilifying me for my lack of career success? What about my other successes? All he has to do is look around to see those in 3-D and Technicolor. All he has to do is look into his children’s eyes. I have created so much that is a success. Plus, when’s the last time he actually read anything I’ve written? Just because the publishing world doesn’t deem my work worthy doesn’t mean it’s not.

In writing This Is Not The Story You Think It Is, Laura reflects on the early days with her husband. She delves into their connection and the caring moments the two have shared. They lived in Boston, then Seattle—where her husband ran a successful brewery– and finally moved to the wide plains of Montana. Laura has written 14 novels and has never had one published. She does manage to publish the occasional article but not nearly often enough. Laura also reflects on the successful marriage of her well-to-do parents. She was a daddy’s girl and feels good about it. And by caring for her own well-being and providing her husband with support in silence and space, Laura and her husband come to an understanding.

This Is Not The Story You Think It Is: A Season of Unlikely Happiness

Laura Munson, Montana, This Is Not The Story You Think It Is

This entry was posted on March 31, 2010, 23:57 and is filed under Books. You can follow any responses to this entry through RSS 2.0. Both comments and pings are currently closed.