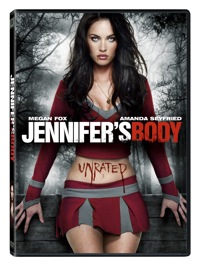 Why this didn’t do much better at the box office I have no idea.  Jennifer’s Body, written by Diablo Cody [Juno], spoofs horror films in a blatantly feminist manner. Jennifer [Megan Fox] has a life-changing experience after hooking up with the lead singer in a rock band. That same night that entire club burns to the ground, reminiscent of The Station Nightclub fire five years ago in Providence, RI. Many local high school teens and members of the small town die in the blaze. Jennifer arrives at the house of her straight-edged best friend Needy [Amanda Seyfried] all bloodied and acting strange. She even projectile vomits a black spiky substance. After that night, Jennifer is happier than ever before while everyone else remains in mourning over the tragedy. She starts a killing spree where she lures boys—first the popular guy on the football team—to isolated spots and then kills them, ripping them apart. Jennifer’s Body isn’t scary because the audience knows Jennifer’s m.o from the beginning. It’s gory and a bit creepy and bizarre. What is motivating Jennifer? What is making her act in this manner? My guess was not what it ended up being at all. [“She’s eating boys. They, like, make her really pretty and glowy and her hair looks amazing. And then when she’s hungry, she’s weak and cranky and ugly. I mean ugly for her.”] Jennifer’s Body is symbolic of feminist revenge on all the men who treat women like crap: the popular guys, the guys who just want sex, the guys who say mean things about women etc. Jennifer is wiping them out one by one. Cody refrains from the precocious dialogue here, suiting it more to this film. She has a few weird phrases [“It’s freak-tarded.” and “You make me all wetty.”]. She’s done a commendable job in tackling this male-dominated genre with a thoughtful, clever script that may not have been perfectly executed and for that she deserves a ton of credit.

This entry was posted on December 20, 2009, 02:32 and is filed under DVD. You can follow any responses to this entry through RSS 2.0. Both comments and pings are currently closed.