book review: Skeletons at the Feast 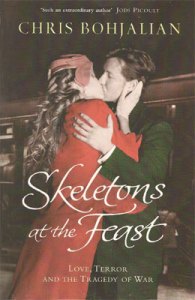 Title: Skeletons at the Feast

Anna understood on a level that was more intellectual than visceral that aging represented a steady winnowing of a life’s possibilities. She grasped death from bullets and bombs and bayonets far better than she did death from old age and cancer. But she was not uncomprehending of the reality that the infinite steadily contracted, the options narrowed, and eventually one’s future would be as shallow as a spoon. As predictable—and enervating—as the mud that followed the first thaws in March. And so as they walked on toward Stettin, three more days beneath a dreary, ever-lowering sky, in her mind she recited a litany of names. Yes, they did get distracted. All of them. They were distracted as much by their memories of what—of whom—they had lost as they were by what loomed before them. Gone, she thought, at least for the moment, was Werner. And disappeared behind him into that great fog of battle were her father and Helmut. Her twin. Then there was her mother’s brother, dead, as well as the obdurate man’s daughter and daughter-in-law and grandson. There were Klara and Gabi, not certainly dead but most likely dead. Russians, two killed in a barn in the midst of an act of inexplicable kindness. No, that wasn’t right: It wasn’t an act of kindness at all. They were stealing everything her family had: They had simply chosen not to rape and murder her in the process. Funny how war altered one’s definition of mercy.

Skeletons at the Feast highlights an aspect of WWII that many people may know little about: when the Third Reich finally was losing ground in Germany, Russian forces started to take over the countryside and people began to flee their homes in an attempt to reach Allied Forces (British and American) across the lines of the Third Reich. Chris Bohjalian depicts the horrors and the disregard for humanity and numerous despicable moments in this unforgettable work of historical fiction. Bohjalian makes the story much more powerful by adding memorable details: soldiers raping, humiliating and killing young girls and babies; a girl at a camp who survives due to the boots her boyfriend gave her before the war; trading family jewelry for beets and potatoes, entire wagons of Jewish prisoners being burned alive, discussions about banned German books, listened to the verboten BBC radio, the Hitler Youth, a woman having her period and having a riding crop forced inside her vagina by an SS guard.

Skeletons at the Feast focuses on the Emmerich family, Prussian aristocrats. 18-year-old Anna is the central figure. Her lover, Callum Finella, is a Scottish prisoner of war, who had been brought to work at her family farm. Her mother Mitti and younger brother Theo join the group that embarks on this bitter winter journey. Uri Singer, a German Jew who escaped from Auschwitz, and has taken the identity of a Wehrmacht corporal joins them on the journey. Skeletons at the Feast painstakingly describes the details of their relationships, struggles, feelings, and reaction to the war-torn countryside.

This entry was posted on October 27, 2009, 19:20 and is filed under Books. You can follow any responses to this entry through RSS 2.0. Both comments and pings are currently closed.