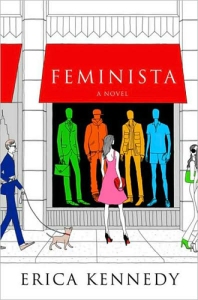 Sydney would never be a real success in her mother’s eyes as long as her ring finger was bare, but that was Vera’s hang-up, not hers. Marriage was not an accomplishment. When were women (most of whom felt that way, whether they’d cop to it or not) going to get that through their heads? Crossing the finish line in a marathon. Becoming a cardiothoracic surgeon. Winning an Oscar. Those were accomplishments. Getting married was just a (hopefully) happy fact of life.
Ditto for having kids. There was no achievement in doing what any menstruating teenager could do. The achievement was in being a good parent, and just because every parent wanted to think he or she was didn’t make it true.

FEMINISTA is smart fun. Erica Kennedy [Bling] turned out a feverish bitch lit novel with an astounding eye for the often ridiculousness aspects of social-climbing, societal expectations and prosperity. The central figure 33-year-old Sydney Zamora defies most friendly “chick lit” classifications. Sydney is outspoken, hard-working and independent and rocks the combat boots. She’s also a bit pissed off at everything. She literally says whatever is on her mind with little editing. Yes, it can get her into trouble. She despises trust fund kids that only party and those that have no intention to ever do any charity work. She doesn’t blindly follow popular trends. This lovely, sassy biracial Manhattan celebrity journalist earns a fantastic salary for glossy magazine Cachet and works very few hours per week. But while Sydney has an enviable life on paper and seemingly at first glance, is she truly happy?

Sydney’s progressive lesbian sister—a suburban mother and half of a power couple—gives her a birthday present that horrifies Sydney: the services of exclusive matchmaker Mitzi Berman. But is the joke on Sydney when she becomes one of Mitzi’s most difficult and nearly “unmatchable” clients? Sydney has typically dated [short-term] rocker/slacker-types. Haven’t we all? There’s something about a guy up on stage with a guitar.  In the midst of all this is Max Cooper, the heir to a hugely popular department store [Sure, he wanted to do something with his life, but that something would be his passion, not his profession.] Max [who happens to play bass in a band] meets Sydney and she thinks he’s a doorman. Though attracted to Max she thinks it’s time to get more serious with her personal life. While Sydney has reached professional success, her personal life is not where she expected it to be.

Why do women have to sacrifice one for the other? Why can’t women have both great careers and great personal lives? Is it possible? Will powerful female executives with families ever NOT be asked how they manage to “balance” it all? Will single women over 30 ever stop being asked if they have plans to “settle down?” Will society stop looking at single women over 35 as anomalies, circus freak shows, as something is wrong with these women? In FEMINISTA Kennedy manages to delve into such multi-faceted issues with adept style, wit and an innate knowledge of what motivates and infuriates today’s women.

This entry was posted on October 25, 2009, 21:33 and is filed under Books. You can follow any responses to this entry through RSS 2.0. Both comments and pings are currently closed.