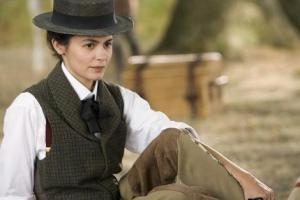 Coco Avant Chanel is a stunning film and an inspirational story about a young Gabrielle “Coco” Chanel [Audrey Tautou] and the impetus for her foray into the male-dominated world of fashion design. She and her sister are left at an orphanage by their father as young girls. Fifteen years later, the duo makes money singing and dancing in bars. Coco dreams of moving to Paris. Her sister [Marie Gillain] falls in love with a Duke and moves to Paris with him. Left on her own, Coco travels to the home of Etienne Balsan [Benoît Poelvoorde] who fancied her despite the intense sparring. He is wealthy and breeds and trains race horses. When he entertains guests, he keeps Coco hidden. Coco will not bind herself with an uncomfortable corset as is the fashion at the time. She prefers to wear comfortable clothing. One day she decides to teach herself to ride a horse. Instead of riding side saddle like all the other women, she rides astride. She dresses like a boy a lot of the time. And with her un-made up face and lack of bobbles and jewels, she looks fresh and different from everyone else. She soon ends up socializing with Balsan’s friends and becomes close friends with an actress. Coco starts to make hats that everyone wants. The pivotal moment for Coco is when she falls deeply in love with an Englishman, Arthur Capel [Alessandro Nivola]. However, he is keeping something from her and Balsan is all too eager to reveal it out of spite. Balsan tries to control an uncontrollable Coco and Capel recognizes her artistic talents and independent spirit. That is why he adores her so much. Coco declares that she never intends to marry anyone [and never does]. She tells Balsan one day that she plans to move to Paris. He scoffs and says that it is silly and she will not be able to support herself. Capel on the other hand encourages her entrepreneurial attitude and will lend her the money she needs to start a design shop.

Audrey Tautou [who most remember for the sprite, cheerful Amelie] shows depth, intensity and determination in this role. You cannot take your eyes off of her beauty and strength as Coco for one moment. She is the young and determined, scrappy Coco Chanel who intends to make a name for herself. She triumphs over many obstacles and tragedies. As Capel, Nivola is handsome, charming and irresistible. And a triple threat—an American known for indie roles [Junebug, Laurel Canyon], his period British characters [Mansfield Park], now acts in perfect French in a French film. His chemistry with Tautou is electric from the moment they make eye contact. At one point she even tells her now lover Capel, that he could have married a celebrity but he chose money instead. What a strong woman. Coco Chanel is a role model. Under the direction of Anne Fontaine, Coco Avant Chanel is stunningly shot. Each scene is beautifully crafted and planned. I didn’t want the film to end. I adored every moment of Coco’s journey to the final scene where she exhibits her first clothing collection that features the signature Chanel suit. If you can see Coco Avant Chanel in the theatre, do so. These independent films that represent small works of love and art are few and far between.

This entry was posted on October 14, 2009, 22:28 and is filed under Film. You can follow any responses to this entry through RSS 2.0. Both comments and pings are currently closed.