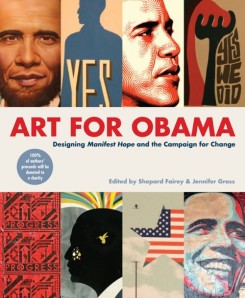 Designing Manifest Hope and the Campaign for Change

Art for Obama is certainly a collector’s item for “fans” of the 44th president of the United States, Barack Obama, as well as those who love art that makes a statement. It is a beautiful coffee table book with 150 full-color illustrations throughout. President Obama stirred a grassroots political movement throughout the country and also inspired artists, illustrators and graphic designers.

The book is edited by Shepard Fairey and Jennifer Gross. Shepard Fairey shot to international stardom when his iconic “HOPE” portrait of Obama which soon became the face of the campaign. Fairey received a personal thank-you note from Obama. Shepard Fairey began his career with the ubiquitous OBEY GIANT graphics while a student at the Rhode Island School of Design in 1989. He’s known as a street artist. He likes to spotlight street art and enterprise with his work. It can currently be seen in an exhibit at ICA Boston. The show’s next stop is the Andy Warhol Museum in Pittsburgh, Penn.

Ron English created an oil on canvas Abraham Obama—Barack Obama as Abraham Lincoln. “If you’re Will.I.Am, you make a hit song in support of the campaign,” English said. “If you’re Shepard Fairey, you create an indelible image of Obama. If you’re Sarah Silverman, you deliver a punch line with a purpose. Obama has also allowed a plethora of artists to interpret and disseminate his image, and those of us who had any involvement with the campaign were only nudged with one mandate—please stay positive.”

Diederick Kraaijeveld created a portrait of Obama out of vintage wood found on Mombasa beach in Kenya. Maya Hayuk made Here is Now out of acrylic and aerosol on Masonite and plywood. It is a mouth designed to allow people to put themselves inside the shouting instead of merely looking on. Out of vintage license plates, Aaron Foster created a collage Fifty States—One Union. Justin Kemerling made an ink and paint series on wood panels: HEAL for universal health care, UNITE about “green collar” economy, and CATCH for “renewable energy future.” Lisa Anne Auerbach knitted a very cool sweater and skirt. The front of the sweater reads My Jewish Grandmother is Voting for Obama. The back reads Chosen People Choose Obama. There are Jewish stars all around. It’s so amazing! Photographer Kwaku Alston traveled with the Obamas during the campaign and captured some fantastic pictures.

In photographing Obama Silhouette, Alston said: “I intended to hint at a familiar profile of JFK, the young presidential candidate who is unafraid of the challenges before him. The idea was to revisit the portrait, but to make a shift and try to create a timeless image.”

100% of profits from the book will be donated to the charity Americans for the Arts.

This entry was posted on September 28, 2009, 02:01 and is filed under Books, Visual/ Performance Art. You can follow any responses to this entry through RSS 2.0. Both comments and pings are currently closed.